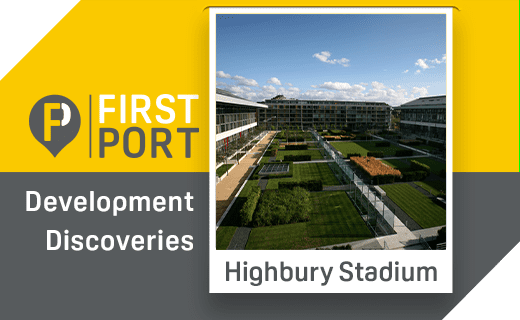 Situated in the North London borough of Islington, Highbury Stadium Square still stands proud. Once the glorious ex-Arsenal football ground, Highbury now consists of 725 apartments and some marvellous gardens, with the buzz and electricity ever-present.

Highbury Stadium Square
Once nicknamed the ‘Home of Football’, Highbury Stadium, the ex-Arsenal football ground, still stands proud in Highbury, North London. However, the roaring crowds, red and white stands and immaculate pitch have now been traded in for luxurious apartments and a quaint (and still immaculate) communal garden.

History
Built in 1913, the stadium was home to the Gunners for nearly a century. Arsenal was, in fact, the first London team to turn professional, and first into the league, which prompted then manager, Henry Norris, to start the move.

After visiting many potential sites, Norris signed a twenty-one-year lease on the fields of St John’s College of Divinity for £20,000 (which is now roughly an incredible £2,200,000.00), with the college remaining at the stadium until it burnt down in the Second World War. Two conditions of the lease stipulated that no games were to be played on ‘holy days’ and absolutely no liquor was to be sold. Both were scrapped within a year.

Over the summer of 1913, the stadium was hastily built. Designed by Archibald Leitch, a popular stadium architect of the time, the original football ground featured one single stand on the east and three sides of banked terracing. Although not complete, the stadium saw its first match on September 6th 1913 – a 2-1 win to Arsenal against the Leicester Fosse.

Refurbs and the way up
After World War One, the league resumed and Arsenal saw themselves in Division One – a division they have been in ever since. Six years later, and with the Gunners still on a high, the glorious stadium hosted its first England game in 1920.

After buying the site outright, major refurbishments began to take place in the 1930s, resulting in none of the original Leitch-designed stadium stands remaining today. The refurbishment was grand in scale and ambition, with hopes to create a stadium that reflected the glory of the team. The art-deco West Stand was designed by Claude Waterlow Ferrier and opened in 1932. Perhaps being the most innovative grandstand of the time, it could seat 4,000 and stand an additional 17,000. In the same year the local tube station, Gillespie Road, was renamed Arsenal. The original Leitch East Stand was knocked down to make way for a matching art-deco stand in 1936, which is now Grade Two Listed. 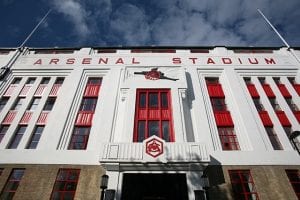 This new stand housed all the players’ facilities and offices, as well as a grand new main entrance, which still stands today as the reception for Highbury Square, with the famous marble halls still gleaming and the bronze bust of Herbert Chapman, Arsenal’s legendary manager, still famously on display.

The Highbury Square Project
After many years of highs for Arsenal, the size of Highbury could not keep up with their success. Every home game was at capacity and due to the stadium being surrounded by residential properties, and some parts being listed, expansion was impossible. After an emotional 93 years, Arsenal moved from Highbury to the newly constructed Emirates Stadium, making away for Highbury Stadium Square complex.

The complex now houses 725 apartments, with the basic concept of the stadium built into the design. The Grade Two Listed West and East stands still remain as apartments, with the original facades being refurbished, and the pitch being remodelled into a communal garden. 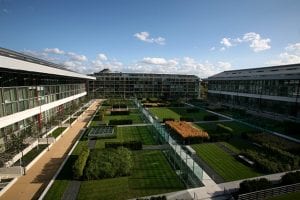 But, even though the stadium is now an apartment complex, the buzz and electricity of the glorious football days still remain in the development. Highbury is in the hub of Islington, surrounded by bars and restaurants, with the centre of London only a short tube journey away. The square still holds the hearts of Arsenal fans, and many of the owners are huge supporters who love owning a part of their teams’ history. A resident even moved there in hope to find another Gooner to settle down with!

In the days when Highbury was a stadium, fans could have their ashes scattered around the goal posts. In the remodel, the grass was relocated to the memorial gardens, which many relatives still visit today. The legacy of the stadium still lives on, with countless documentaries being filmed there yearly.

The grandeur of the life of Highbury makes this one incredible place to live.