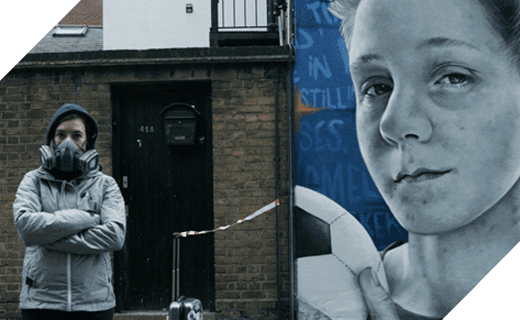 FirstPort’s corporate charity partner Centrepoint has launched its new campaign ‘We Will Be Heard’ to raise awareness of the 22,000 young people facing homelessness this Christmas . They ask that the new government gives these young people a future by building affordable housing and making Universal Credit fair for young people.

As part of the campaign, they have partnered with four street artists and agency CreativeDrive, to design and paint large pieces of graffiti in six sites across London. The six campaign silhouettes display stories of six young people that Centrepoint have supported from homelessness to independence.
Graffiti artists Zabou, Jeba, Tizer and Bullet on a String have each brought their own unique creative styles to the campaign to raise awareness of the struggles faced by homeless young people, who can face terrible loneliness and uncertainty especially at this time of year.

In Gaskin Street (London, N1) Zabou has created this large portrait of Becca. Through one of Centrepoint’s engagement programmes, Becca went from being homeless after her relationship with her family broke down, to playing for England at the Homeless World Cup: “Before I was involved with the football, there wasn’t much that I would engage with. I was just in a bad way. And though I got into it for the football, I soon realised it was way bigger than that, and I started to learn different transferable skills that really helped me in day-to-day life”. Becca now volunteers as a coach for Centrepoint, and recently mentored players at the Homeless World Cup.

Amy Klein, Centrepoint’s Senior Direct Marketing Manager says: “This campaign is about telling the stories of young people like Becca, who are homeless or at risk of homelessness through no fault of their own. This winter 22,000 young people will be homeless or at risk. By using disruptive advertising methods like street art, Centrepoint aims to raise awareness of the scale of youth homelessness and gain the support of the public to help end it.”

Centrepoint is asking people to add their name to the #THE22000 campaign at www.centrepoint.org.uk/22k