Dorothy and Roger rekindle their romance after almost 60 years apart 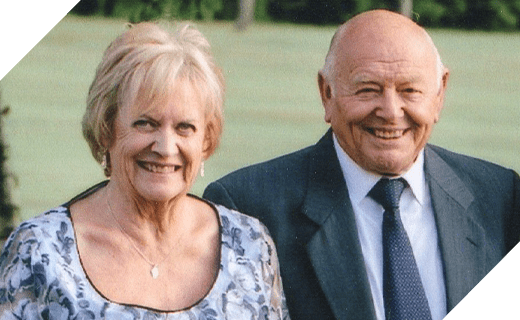 Life can take all sorts of unexpected twists and turns, especially when it comes to the course of true love. One person who can vouch for this is Dorothy Brown, who has been reunited with her first love, Roger Kenyon, after almost 60 years.

Dorothy first met Roger in Tenby, South Wales. She had a friend who lived in Wales and the pair of them took it in turns to stay with each other every year. In July 1960, at the age of 20, it was Dorothy’s turn to stay with her friend in her caravan in Tenby. Roger, who was 21, and his friends were staying in the caravan next door. The pair instantly hit it off.

At the time, Roger was working in north London as an electrical engineer on a Government scheme, while civil servant, Dorothy, lived in Newcastle. Roger used to travel up by train for the weekend once a fortnight and they used to exchange letters in between seeing each other too. However, when the Government scheme Roger was working on was cancelled and his mum asked him to go back home to Llanelli in South Wales after his dad had a heart attack, the couple were even further apart from each other and the relationship fizzled out.

In 1963, Roger married Jean and went on to have a boy and a girl. Meanwhile, Dorothy met Fred, who she married a year later in her local church in Darvel, not far from Kilmarnock. They also had a boy and a girl and were married for more than 30 years. Fred passed away 20 years ago; unfortunately Roger encountered more of a tragic situation as Jean was killed in a road accident.

After around four years of being on his own, Roger met Dilys and they spent 30 happy married years together until she sadly passed away. Two years after losing Dilys, Roger was in Llanelli where he bumped into Jasmine, one of Dorothy’s old room-mates in Newcastle. Roger asked after Dorothy and so Jasmine gave him her number. “He must have been sitting thinking about it one day and then just gave me a ring. That was how it started and then we met up again almost three years ago,” says Dorothy.

Roger used to visit Dorothy when he was working in the North East. Then they decided to go on holiday together to the Canary Islands for a week. After that, she went back to South Wales and stayed with him for a few days and things evolved from there.

“I’ve always really liked him. My husband, Fred, was a really good man, but I always had a hankering about Roger and whenever he heard about Scotland, Roger said he always thought about me. I guess it was always meant to be.”

Dorothy rented out her apartment in Sanford Court, Newcastle and the two of them – now 79 and 80-years-old – are living happily together in Roger’s bungalow in Llanelli, back in the part of the country where their paths first crossed all those years ago.