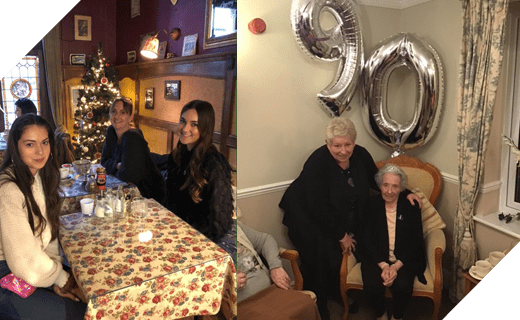 Not only do we have a mother and daughter who both live at retirement development, Coachman Court in Essex, we also have a mum and daughter working alongside each other.

Lin, 70, has lived at Coachman Court for over seven years and her mum, Jean, 91, moved there three years ago following the death of her husband. It was a joint decision between mum and daughter for the pair to share an address, meaning that Jean had the support she needed.

“After my stepdad died, mum and I decided that it would be best for her to be closer to me for support,” Lin explains. “We hadn’t originally planned on her moving into Coachman Court – we just wanted her close by – but when a flat became available, we thought it would work well.”

Jean and Lin are fortunate that they can see each other every day. Living in the same development means Lin is on-hand to help her mum with practical and emotional support. Although the development community helps make sure they are not living in each other’s pockets.

Lin explains: “In normal times – before the pandemic – my mum would often be found in the communal lounge with a group of friends, which gave me the opportunity to see my own friends too, which I really enjoy.”

Jean adds: “It’s lovely having my daughter so close. She’ll come and paint my nails or we’ll sit and watch our favourite TV programme together – I‘d be lost without her.”

Lin concludes: “I very much like my own space, so having mum under the same roof, but with our own separate front doors, works well for us. As long as mum is able to live on her own, we’ll continue to enjoy Coachman Court together.” 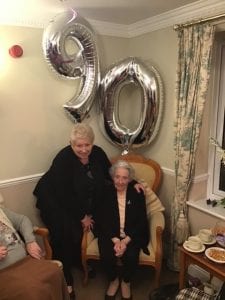 Jean with Lin at her 90th celebrations last year.

Also, at Coachman Court, Lisa Saunders and her 17-year-old daughter, Samara, both work at the development as Housekeepers. Lisa has another daughter, Nikita, who also worked at the development until last year before she joined British Airways to pursue a career as a flight attendant.

Lisa, who has worked at the development for just over three years, heard about the job through Nikita, and then alerted Samara to a vacancy in September 2020.

Lisa says: “The residents love the fact that there is a mother and daughter working here. Sadly, we don’t work the same shifts, but when I am at work, residents are always asking about Samara and vica versa. It’s a bit of a novelty.”

Samara is working at the development whilst studying and she has loved being under her mum’s wing. “Coachman Court is a lovely place to work,” Samara says. “The fact I can do it with my mum makes it all the more special – It’s like a home from home.”

Lisa with her two daughters, Samara and Nikita.