Joe, a World War II veteran, shares his memories of the D-Day landings 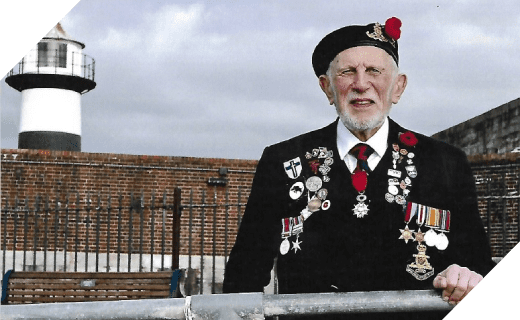 On June 6, 1944, more than 160,000 Allied troops landed in France to take on Nazi Germany in the Battle of Normandy, which proved to be the major turning point in World War II.

Every year, hundreds upon thousands of people remember the fallen soldiers, celebrate the survivors and reflect on the epic D-Day landings.

Joe from Mill Court was a member of the 86th Field Regiment of the Hertfordshire Yeomanry Royal Artillery, which was attached to the US 82nd and US 101st Airborne Divisions (of ‘Band of Brothers’ fame) through Operation Market Garden and the Battle of the Bulge.

Having sailed from Southampton, Driver/Bombardier, Joe, landed on Gold Beach, Normandy at 10am on June 6, 1944 to ships bombing German positions, heavy fire from German artillery batteries and under-sniper fire.

Joe thought it was another exercise and he didn’t realise it was ‘the real thing’ and they were going to invade the following morning until they were halfway there, on the night of June 5. ‘It wasn’t until the barrages opened up that l started to feel scared – and I hoped and prayed I would get through it all,’ says Joe.

Joe’s regiment pushed on to Ver-sur-Mer, St Leger, Bayeux, Lille and Amiens, Niemagen and Arnhem, Brussels and Antwerp and The Ardennes, where they provided artillery support for the US during the Battle of the Bulge.

They relieved the Americans (101stAirborne) at the Siege of Bastogne before heading back to Niemagen and the Battle of the Reichswald, where they were subjected to a barrage of more than 1,000 guns for over six hours every night. They went on to cross the Rhine, making their way towards Bremen, then Hamburg, Hanover and up along the Danish border – fighting pockets of SS Troops every step of the way.

Six years ago, Joe returned to Normandy for the 70th anniversary of the allied landings, where he was reunited with his fellow World War II veterans and awarded France’s highest honour, The Legion D’Honneur. In 2016, he also attended a commemorative garden party at Buckingham Palace.

Last year , he went to the 75th anniversary memorial service in Arromanches, where he met both the British and French Prime Ministers. He also represented the few remaining World War II veterans at the unveiling of the D-Day commemorative garden at this year’s RHS Chelsea Flower Show.

It wasn’t until the barrages opened up that l started to feel scared – and I hoped and prayed I would get through it all.