Leading the way on green issues for FirstPort 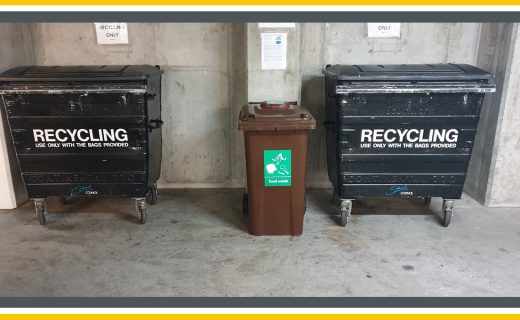 20th September – 26th September 2021 is World Recycling Week and John Graham, FirstPort’s Development Manager for Empire Square, has asked me, as green spokesperson on the Empire Square Residents’ Association (ESRA), to highlight some of the success stories over the past few years.

Empire Square is a 572-unit development, with a 240-place underground car park and a courtyard Garden in Southwark in London, adjacent to Borough Market, Guy’s Hospital and London Bridge Station. John Graham and his team, which includes Sandro Erazo-Lopez, Maintenance Operative, and Ibrahim Medi, Caretaker, and the Concierge team members, have initiated many environmental improvements and have always fully supported recycling initiatives from Southwark Council, ESRA and residents.

When John first took over the development, he was faced with a very large waste store full of fly tipped household and other waste items. Previously similar waste had cost the estate around £3,000 a time to hire contractors to remove, as the waste breached local council regulations. John and his team, with the support of ESRA, set up a meeting with the Local Environmental Agency Operations Manager to discuss the issues. 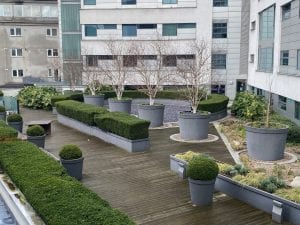 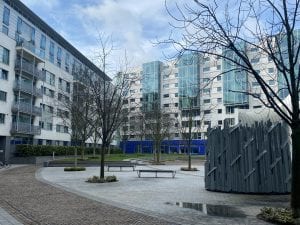 What was the outcome?

The outcome was positive for all parties: the outstanding waste was removed free of charge by the council, and the estate promoted the council’s policies on Bulk Rubbish disposal, and the separation of household waste into items to be recycled (put in clear plastic bags supplied free of charge by Southwark council), and all other waste items (put into black plastic rubbish sacks). All bags were then put into the appropriate large bins in the waste rooms in the car park. ESRA delivered leaflets on what could be recycled to every household, and John and his team promoted the policies through a newsletter on Bulk Rubbish Policy, information on notice boards and in lifts, and through the Concierge team.

Another initiative from John was the introduction of a large scrap metal bin in the car park for all metal items as residents had been putting metal waste in both recycle and general waste which did not please the council. Residents were informed about the new policy, and the scrap metal bin, which is emptied regularly, has solved the problem. John and his team keep in touch with the Environmental Management department of the council, which continues to be very supportive.

It occurred to me several years ago that there was an opportunity to recycle clothes and household goods. This led to the Free Car Boot Event, held several times a year on a Saturday morning. John assigned us a room for storage of goods between events, ESRA members and partners are very supportive with help before and on the day, and Ibrahim helps with the early morning heavy lifting and putting away on event day. It has become a popular community event for residents across the estate, and it helps recycling and the environment.  In addition, the book exchange uses two fireproof metal cupboards with locking doors (available 24/7) filled with children’s books, adult books, DVDs and CDs. These can be taken out and returned when no longer wanted (like a library) or kept, as replenishments keep on coming in!

Spurred on by the small changes that have made a big difference, John and his team and ESRA are always on the lookout for new green initiatives. A trial is currently underway with an electric vehicle car charger point for residents. This works through a phone app for payment and has proved popular. If demand is there, as more residents buy electric, more points can be installed. The trial has proved so successful that John is actively encouraging other FirstPort estates to explore this option.

For some years I have built a garden at the junction of Sterry Street, Southall Place and the Pilgrimage Street council car park. This has proved pleasing to local residents and pedestrians passing through. In 2019, I applied for a grant under the Council’s Cleaner, Greener, Safer scheme, and was successful in gaining £1,000 to be spent on plants. I am happy to say that every penny (bar 38 pence, which will not even buy a packet of seeds) has been spent in 2020, and the results will be there this spring and summer for all to see. Following council rules, John acted as the conduit for the money from Southwark council to me. The next garden project is Sterry Street, the site is being cleared and will be replanted with fragrant climbers and small shrubs this year.

The latest green initiative being undertaken by John and his team is for the recycling of food waste. This requires all food waste to be kept separately in a small brown food bin by residents and emptied into a large brown bin for food waste only once a week.  This bin will be emptied every Saturday. The Empire Square residents are part of a trial being run by the Environmental Management department of the council. Due to Covid, the trial was paused temporarily: residents already have their small brown bins but have not been able to empty them as they await the large brown bin. As lockdown is lifted the council will get back to normal working and the large brown binbwill arrive!