Love thy neighbour: Retirement residents meet and marry in time for Valentine’s Day 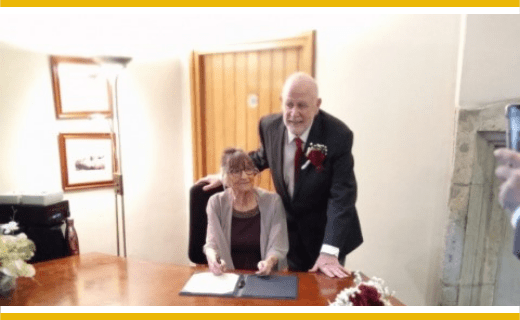 Peter and Viv Mooney first met at Homepine House, an independent retirement development in Folkestone, Kent, managed by FirstPort. The development provides a strong sense of community, with regular activities and communal facilities, including an on-site bar and communal lounge. Viv, 80, initially moved to the development in 2013, with her late husband.

Peter, 77, himself a widower, first met Viv in the bar at Homepine House in September 2021, having moved to the development earlier in the year. For Peter, this first meeting was all he needed to know he’d met his match.

Recalling their first encounter, Peter said: “I was just sitting there and Vivi came up and spoke to me. She was the first lady there that really spoke to me, and I just felt that was it, I liked her – and then we fell in love in such a short time.”

Reflecting on her early impressions of Peter, Cupid’s arrow instantly found Viv too: “Peter is a lovely, kind, thoughtful, generous man and I just love his company.”

Following a whirlwind romance, Peter and Viv soon realised their relationship was blossoming into more than just a courtship. After returning home from an evening with friends, Peter got down on one knee and asked for Viv’s hand in marriage.

They decided to marry on 22nd January, news which was warmly received by fellow residents.

“They were over the moon, they were all congratulating us and were so pleased for us. They’ve been brilliant.” Said Viv.

Supported by their friends and families, Peter and Viv tied the knot at the Archbishop’s Palace in Maidstone, where Viv was walked down the aisle by her grandson, and supported by her granddaughter, who was a bridesmaid. Meanwhile, fellow Homepine House resident, Jim, served as Peter’s best man.

Following the ceremony, the celebrations continued back where it all began – in the bar, at Homepine House, where close friends and family joined the newlyweds for an evening reception.

Having met his new wife under the same roof, after relocating to enjoy new surroundings and community atmosphere, Peter’s was emphatic in his recommendation of life at an independent retirement development: “Best thing I ever did”.

Beckie Rust, Development Manager at FirstPort, which manages Homepine House, said: “Peter and Viv are both wonderful people with a friendly and caring nature. I am so thrilled for the both of them that they have found love and happiness together. It has been so lovely to see their relationship blossom from the very beginning until now. I wish them all the happiness in the world.”