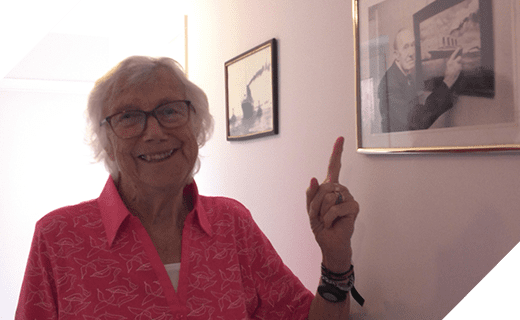 Most people have heard of RMS Titanic and are familiar with its fate after it hit an iceberg during its maiden voyage on April 15, 1912. But for Marion Sorfleet, it’s more than just an epic tale in which 1,500 people died and 705 survived. While the Bramley Court resident may not have been alive when the maritime disaster took place, her dad, Sidney Daniels, was living and breathing every minute of it.

“My dad was a steward on the Titanic. If I remember right, as I was a child when I heard these stories, he was around 18-years-old,” explains Marion. “He and his colleagues were in their cabin where their bunks were when the alarm came through for them to go to their stations and help the women and children on to the lifeboats.” Shortly afterwards, the captain ordered every man for himself.

“Dad proceeded to cut down his own lifeboat using a pen knife. The number 13 life raft, which was his, fell upside down into the sea and floated away.” But while number 13 may be unlucky for some, fortunately it wasn’t for Sidney, who was among the survivors. “Dad dived into the pitch black freezing waters and, as luck would have it, he came across his upturned lifeboat, and there was just enough room for one more on the upturned keel. Four hours later, the transatlantic RMS Carpathia came to their rescue.”

However, it wasn’t until Marion was around eight to nine-years-old that her and her three older brothers discovered what their dad had been through. “It was years before he mentioned anything. Before then, he said he didn’t want to speak about it because he’d lost too many friends that night,” adds Marion. “When they filmed the Titanic film in 1997, dad was invited along to retell the disaster, and when you watch the film, you see the lifeboat (his lifeboat number 13) being cut down.”

“By the time I was old enough to understand what he’d been through, we’d lost him, bless his heart. I’m just so glad that he survived, I wouldn’t have been here if he hadn’t.”