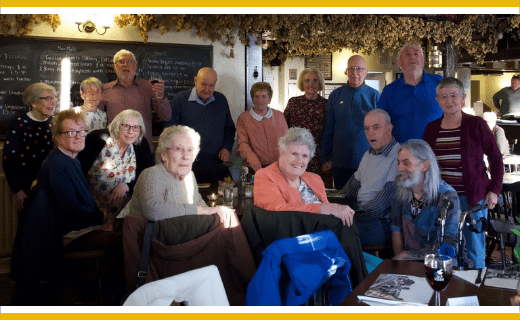 A retirement Development Manager from Kent says a monthly supper club introduced last year has “been a lifesaver” for many residents who were feeling isolated following the impact of the pandemic.

Around a month into his role as FirstPort Development Manager at Parkside Court in Herne Bay, Clay Godden decided he would start a supper club, where residents pick a different restaurant every month to visit in the area.

The supper club has now been running for over a year and residents have managed to tick off nearly every restaurant in Herne Bay.

“When I started the role during the pandemic, I found out that a fair chunk of people here has no one else and there were no outside regular events going on. So, it was lonely at times. Now, I live alone too, and cooking for one can get a bit dull. So, one day, I jokingly said to the residents, ‘Why don’t we start a supper club?’… Well, the idea cottoned on, and we decided to give it a go. It’s fair to say, we haven’t looked back since.”

The club has been widely welcomed by residents. Phyllis Skingle regularly attends the group. She said:

“It’s not natural for people to be on their own, either in isolation or because they are on their own anyway.”

“The supper club, along with other activities that Clay helps to arrange, brings you closer together to other residents and you start to build firm friendships with everyone. It’s been lovely.”

Clay says the club is “all about community”, both being able to catch up with other residents and helping to support local businesses.

“It’s just so much better than sitting at home watching whatever is on TV. We all get some company; we get outside, we’re sociable and meet people from across the community. It really has been a lifesaver for many residents who were feeling isolated following covid. The more fun stuff we can do like this, the better.”

“The supper club is fantastic. We get to try other nations’ foods that you wouldn’t necessarily try if you were to eat out on your own. I’ve loved everything, and it’s been a really great experience. This kind of event helps to make us one big family.”

Dougal and June Bryson, who are also residents at Parkside Court, say they’ve made more friends through the club.

“It gets us out of the flat. There’s so much joy in meeting not only people in our development but also in the wider community. There’s a mixture of new faces as well as old.”