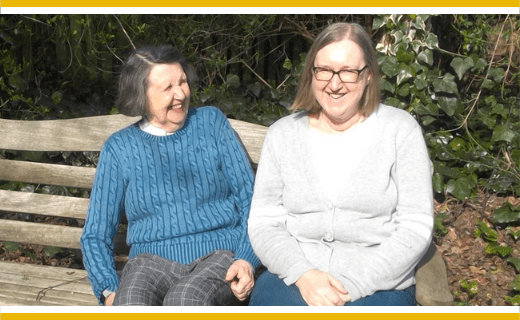 Mother’s Day is the one day in the year when we recognise, celebrate, and honour the unconditional bond between a mother and a child.

At FirstPort, we’ve been sitting down with residents and colleagues from across our developments to find out what Mother’s Day means to them, and whether one day really is enough to celebrate all that mums do.

Resident Ruth Hawker and her daughter Jenny (pictured above) have an inseparable bond, despite both saying they are complete opposites in their personalities.

The pair say their bond grew closer as a family following the death of Jenny’s father. Ruth explained:

“My husband – Jenny’s father – was very ill and then he died nine months ago. And Jenny and my two sons were very, very, very helpful and would come over every day to enable me to have a rest. I think that brought us all closer together. And of course, they were very fond of their father. And so, we were going through the sort of grieving together – but they were there really supporting me immediately afterwards.”

As for their Mother’s Day plans, Jenny said her mum might get a card or some flower but admits they don’t tend to celebrate as they often get to spend time together.

“I don’t feel I need one special day because I feel valued and loved all the year-round.”

The pair say they some of their best memories are the holidays they take together, as well as the fun family Christmases.

We asked them both what the secret is to a harmonious family relationship.  Ruth explained:

“I think it’s giving each other space. I think you know we very much like being together. But we also recognize when we need to be apart.”

Jenny instead says it’s about not putting expectations on your children. She added:

“You’ve never expected us to do stuff for you but when we do it, you’re very grateful. But we’ve never felt that we had to do it. You know, we must do this, or we must come and see them or do anything. But they’re just very grateful when we do it.So, I think you almost feel more inclined to do things because you’re not expected to do them, if that makes sense.” 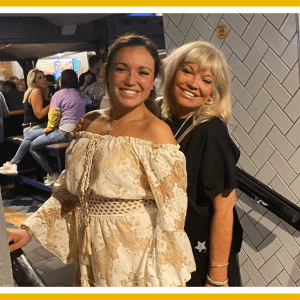 Similar to Jenny and Ruth, Development Manager Jessica Degraag and her mum Michelle have a bond that has only grown stronger over the years.

“The moment Jessica was born; it was like I felt the bond immediately and my mum was there also with me. So, the three, we were really close through the years. I think when my mum passed away about 14 years ago, after that we got even closer – it was just the two of us. Jessica and I do a lot together; we go to the theatre, and I go out with her and her friends sometimes – if she lets me. They all come to my parties.”

As an only child, Jessica jokingly says:

Jessica and her mum also regularly work together. Michelle, who is a visiting carer, often stops by the development in east London to see check in on residents, and she’ll always make sure pop in and say hello to her daughter.

And while Mother’s Day is “just another day” for the pair, they will be celebrating by taking a trip to Michelle’s caravan and heading to her favourite restaurant nearby.

Resident Gillian Gain, from Southampton, says Mother’s Day helps to create many special memories between a mother and her child.

“I can’t remember receiving my first Mother’s Day card, but I can certainly recall when I stopped sending one, just a few months after my first granddaughter, Emilie, was born. When my mother died, I felt bereft and we have just one photo of the four generations of women, one six months old and one ninety-two. Since then, my daughter Marianne has never failed to send me a card on Mothers’ Day, but it still gives me a pang, that I have no longer a mother to send a card to.”

Gillian says she has saved all the cards and she hopes they will be looked at and remembered by her family after she has gone.

“Now my great granddaughter, Clementine, has just been born. Although living across the world, I hope she will continue the tradition of sending a Mothers’ Day card. Young people rarely send Christmas cards or postcards from their holidays anymore. But Mothers’ Day does create a bond between the generations and long may that continue.”