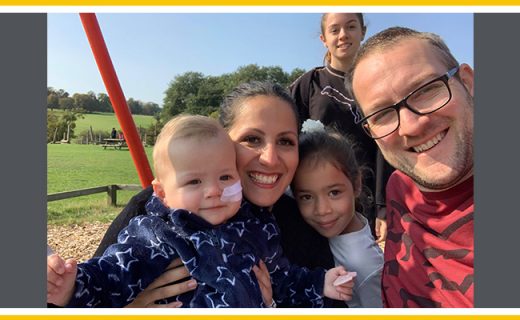 In 2017, my fiancé Richard was diagnosed with the rare condition ARVC (Arrhythmic Right Ventricular Cardiomyopathy). His father also had ARVC and had sadly passed away aged just 35 years old in 1991 due to complications. The condition is not diagnosed until teenage years, and as Richard was only aged 10 at the time, he remained unaware that he too had the condition.

We were informed that Richard would need to go onto the transplant list. Our Wedding was scheduled for December 2018, but we were advised to bring it forward (and begin any family planning) in case he was hospitalised before then. So, we married in August (I was 10 weeks pregnant) and had my two daughters from my previous marriage as flower girls.

In early 2019, we got the call to say a heart was available. Richard had the surgery and came home 13 days later to recuperate. We then welcomed baby Ethan in March – at a healthy 8lb 10oz.

In that August, Ethan became unwell. I’d noticed that he tended to sweat a lot over the summer months but when I found him freezing cold, I immediately rushed him to hospital. Subsequent X-rays found that his heart was abnormally enlarged, and he was diagnosed with Dilated Cardiomyopathy and was in heart failure (with added arrythmias like Richard).

Our baby boy was ambulanced to Great Ormond Street Hospital and placed on the urgent transplant list after he dramatically took a turn for the worse. His health greatly deteriorated again in October due to suspected sepsis and was intubated, placed on ECMO followed a few days later by a 12-hour surgery and placed on the ‘Berlin Heart’ (Ventricular Assist Device (VAD)). This supports children in severe heart failure, until recovery or a transplant is possible. As his heart was so poorly, he needed two chambers with four tubes which pumped each ventricle of his heart for him.

After almost a year in Great Ormond Street Hospital, in the summer of 2020, we received the news that a heart was available for Ethan. During this whole time, he was unable to leave the hospital, where he learned to sit up and do everything a ‘normal’ child would be doing at home.

After 17 days, we finally were able to bring Ethan home. We have been home for a year now, both Ethan and Richard are both having regular check-ups, and thankfully both are doing well.

Ethan is slightly delayed but doing well. He is a cheeky 2.5-year-old and loves playing with his sisters, watching Hey Duggee. My husband cares for Ethan. They have a special bond – love wrestling and going for rides on his bike. Ethan has no fear like his father, which I guess you need having gone through what they both have. 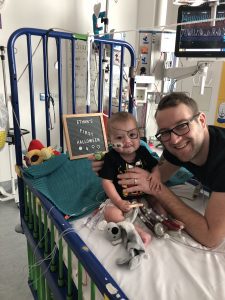 The next part of our journey is to continue to raise awareness around organ donation and asking that families have those discussions today. I would be a widow and lost my son had their donor family not said YES! Thank you doesn’t even come close to what they have allowed us to have, a second chance, memories, and our family finally together again.

Families are being encouraged to talk about organ donation, and for all members of the family including children, and share their decisions to help save more lives. Currently, the number of young organ donors remains static at around 50 a year.

Many patients describe waiting for a transplant as being in limbo, existing and not living. Imagine what it is like when it is a child in need of the transplant, not able to do what other children can, simple things like being able to play and eat normally.

Organs for children are matched in the same way as for adults, using blood groups and tissue types, however size is important for some organs, eg. heart and lungs where there is limited space in the chest.

Hundreds of children receive a transplant each year but sadly children also die each year waiting for a donor.

It is vital that all families talk about organ donation, and for everyone in the family, as children can save lives too and hundreds of children need a transplant. Please have the conversation today and share your decision. For more information, please visit: https://www.organdonation.nhs.uk/

Organ Donation Week is a week-long celebration of organ donation across the UK, highlighting the great opportunity for donor families, transplant patients, the NHS, and other organisations to reinforce the importance of organ donation.