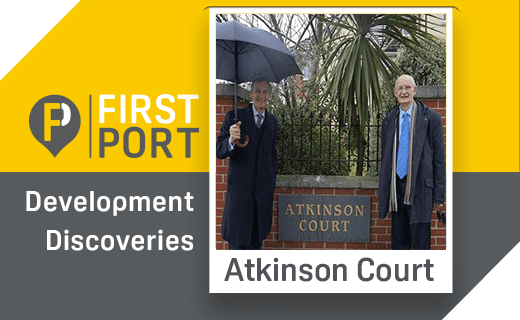 Despite being a relatively new build (built in 2006, it is located to many other similar developments in a desirable residential area in the north of the city), the origins of the name of Atkinson Court is what makes it such an interesting story, along with a recent visit from HM Lord-Lieutenant of Hampshire.

What’s in a name?

Atkinson Court is named after Master Thomas Atkinson, a prestigious Master of the British Navy in the late 1700s and 1800s. In fact, Atkinson is buried just a short distance from the development, just over a mile away, in St Andrew’s Churchyard.

It is fitting that a Portsmouth development should be named in such a way given the city’s rich naval history. Atkinson’s story begins in Yorkshire and ends in Portsmouth, hence his local resting place, but his life has many famous tales of his time in the British Navy.

Born in 1767, Thomas Atkinson joined the Navy 20 years later as a volunteer. By 1793 he had already served in battle and just two years later he was promoted to Master.
Master was the highest position awarded to men who held their rank through warrant and not commission. Tasked with sailing the ship into battle, it was a highly authoritative role and a position of great responsibility.
It was Atkinson’s lengthy spell of service under Lord Horatio Nelson, as the greatest sea warrior in British history, that gained him his most famous recognition. First serving under Nelson in 1797, the pair sailed together in almost uninterrupted service until the conclusion of the Battle of Trafalgar in 1805.

Atkinson was Master of HMS Victory, Nelson’s flagship during the Battle of Trafalgar, where a spectacular British victory conclusively brought an end to the French plans to invade England.
Nelson himself was fatally wounded after being shot by a French musketeer, and Atkinson was a prominent presence at his funeral in 1806. In Nelson’s own log book he described Atkinson as “one of the best Masters I have seen in the Royal Navy” and the pair shared a special bond. Atkinson was even godfather to one of Nelson’s children.

Following the Battle of Trafalgar, Atkinson served ashore in Portsmouth until his death in 1836. He also married and had three children during his life in the city. HMS Victory also remains in Portsmouth, a museum ship since 1922 at Portsmouth Historic Dockyard. Portsmouth remains the hub of the British Navy nowadays.

Residents at Atkinson Court were honoured to welcome HM Lord-Lieutenant of Hampshire, Nigel Atkinson Esq, to their development for an informal meet and greet. Resident, Andrew Luce, organised the special visit for residents having made the connection that the Lord-Lieutenant shares the same family name with Master Thomas Atkinson. 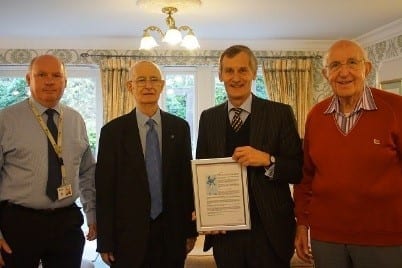 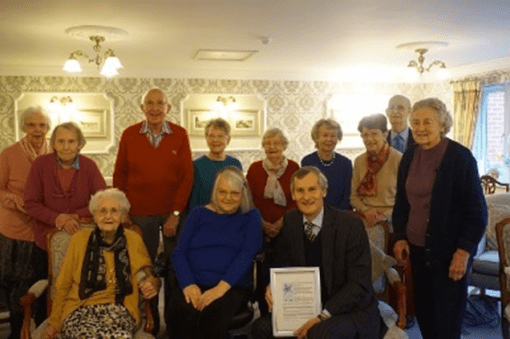 The Lord-Lieutenant gave residents an interesting insight into his life as HM The Queen’s personal representative in the county, with the important role of upholding the dignity of the Royal Family and promoting the atmosphere and spirit of Hampshire. Having had a varied career, which began with a six-year stint with the Royal Green Jackets followed by time in the Leisure & Retailing sector, the Lord-Lieutenant commenced his current role on 12 September 2014 after his name was put forward to HM The Queen by the Prime Minster. He spoke passionately about his duties, including the organisation of all official Royal visits to Hampshire, which he described as incredibly hard work but equally rewarding to see come to fruition as he escorts the Royal visitors around.

Many people would assume the duties of a Lord-Lieutenant would end there, but far from it, this seven-day-a-week, unpaid role includes duties such as the presentation of decorations (where the recipient is unable to attend an Investiture) and The Queen’s Awards for Enterprise and Voluntary Service. Mr Atkinson told residents of his delight in awarding some of the most inspiring people in Hampshire with medals for their bravery and community work.

The Lord-Lieutenant’s role also covers some more unexpected duties, including membership of the committee to appoint Hampshire magistrates and the submission of names for HM The Queen’s prestigious Garden Parties.