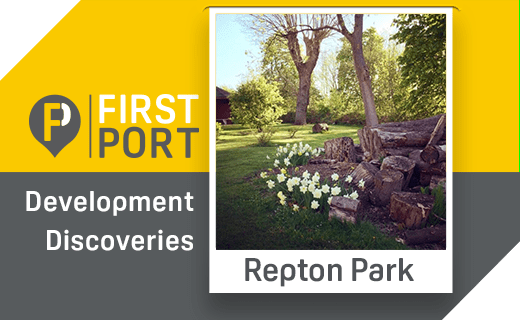 Situated in Woodford Green in the London Borough of Redbridge and surrounded by tremendous buildings and wonderful parkland, Repton Park provides a buzzing hub for the local community.

Repton Park’s grand old Victorian infrastructure owes much to its reputation as a key pillar of the London County Council’s health system. The site began as the location of Claybury Hospital, the 5th London County Asylum to be built. Building work began in 1887 and was finally completed in 1893. To give an indication of how big this project was the costs totalled £579,303 (an enormous amount in the day and age), plus the framework consisted of 27 million bricks, 2,600 doors, 4,600 windows and 33 miles of service pipes.

Claybury was one of the first Asylums to incorporate a research building into Mental Diseases. By its heyday in the 1930s, it had gained worldwide recognition. However, the creation and subsequent expansion of the NHS eventually led to a decrease in patients at the hospital and from the 1970s onwards it grew increasingly redundant.

In 1997 the decision was taken to finally close its doors, paving the way for an exclusive gated community – Repton Park as it is now known.

Now Repton Park, along with the surrounding Manor and Claybury Hall, consists of over 400 homes remaining on the original land. The iconic features remain; beneath a Victorian Water Tower sits an adult only private member’s health club with a stunning gymnasium and swimming pool set in a converted chapel. Open spaces, ancient woodland and landscaped parkways are only moments away. Seemingly untouched, this is a living environment that is carefully managed for the benefit of all.

Repton Park also plays home to an abundance of wildlife which really emphasises the exclusive and natural feel to the development. Deer, bats, squirrels and woodpeckers can regularly be seen and heard through the woodlands and also a few friendly foxes have been spotted roaming the grounds.

One of the more interesting creatures that Repton Park has been blessed with more recently has been the parakeet, found flying around the east side of the development. The parakeet is the UK’s only naturalised parrot and their ancestry comes from the foothills of the Himalayas. There are various theories as to how they entered the country and they are now often found in flocks in the south-east of England.

Repton Park and the team there have earned recognition for their great work. In autumn 2016 they were announced as runner-up in the Best Community Display for the borough of Redbridge in the Redbridge in Bloom gardening competition.

It’s not just external recognition that Repton Park has gained. A couple who had spent over a decade living in the development and have recently moved away reflected on their time in the area:
“When we arrived in Repton in April 2000, the just about finished Chapel Mews was one tiny blip in a huge, muddy building site, with derelict and window-shattered Victorian hospital wards looking on. Probably 95 per cent of the sprawling old redbrick hospital had still to be totally re-structured – and new roads would over the years be built from scratch.

“It was so fascinating (and often spooky in pitch-black evenings) when some of us would wander around Repton-in-the-Making, sometimes pushing into restricted areas to clamber over formidable heavy machinery which lay quiet. It seemed to us within Chapel Mews that there were just we few pioneers on site. Friendships were formed right at the start. And now it’s 16 years on. We made many more good friends as new members joined the

“Fireworks on the Green, fetes, charity cricket matches, walks in the woods hunting bluebells… Such activities are often conceived and led by our hard-working Residents’ Association committee, the concierge and management team add much muscle, and liaise well to foster this great atmosphere. And the grounds still amaze me… SO well-tended, the standards rising rather than falling, over these 16 years.” – Barry & Lyn.

It’s clear to see that Repton Park and all it has to offer plays a huge role in the local community. This is most befitting of the history of the site with its roots so deeply ingrained in the circle of the London County Council.