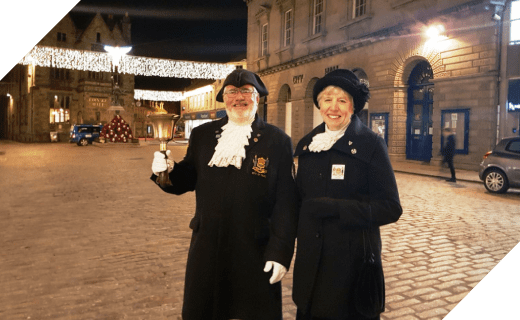 Lowen Court resident, Lionel, may be Truro born and bred, but he never thought he’d end up being the City’s Town Crier, playing such a big role within the community.

“It all started because I hadn’t seen the previous Town Crier for a while, so when I saw the Mayor, I asked after him,” explains 72 year-old Lionel.

“He told me he’d retired due to ill health and asked if I’d like to replace him as I’m ‘a Truro boy.’ I had to go to the Town Hall to ‘try out for it’, I didn’t know what was in store for me.”

“I went out on to the main street with the bell and I thought ‘what am I doing here?’ Everybody was looking at me, but I just did what they asked me to and they said the job was mine.”

Lionel has spent the last six years as Truro’s Town Crier and is a well-known community figure. He and his Consort wife, Carol, can often be seen out and about on the city’s streets taking part in all manner of civic duties, from parades to carnivals and commemorations.

Over the years, Lionel and his wife have donated £15,000 towards upgrading Truro’s Christmas lights. Lionel has also received the Cornwall Civic Award for his role within the local community. He was also chosen to lay a wreath on behalf of the Truro branch of the Royal British Legion at the Menin Gate in Belgium for the 90th anniversary Great Pilgrimage commemorations.

In addition, the couple have been to a garden party at Buckingham Palace and afternoon tea at the House of Commons in recognition of Lionel’s services to the local community.

“It was such a great honour to go to Buckingham Palace. I don’t do the job for that sort of thing, I do it because I enjoy it and it gets me out. Being at Buckingham Palace was amazing; I kept having to pinch myself as I was walking around the gardens to make sure it was really happening.”

It was such a great honour to go to Buckingham Palace. I don’t do the job for that sort of thing, I do it because I enjoy it and it gets me out.