“Perhaps we should move into a retirement apartment?” 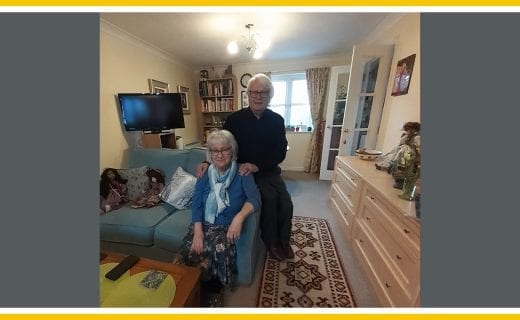 Blog > Real Residents > “Perhaps we should move into a retirement apartment?”

When Nick and Veronica Balmforth contemplated moving home, the decision to opt for an independent living retirement development allowed them to enjoy a new way of living.

“Veronica’s unexpected suggestion towards the end of 2018 certainly focussed my mind. I had lived in a house all my life, was used to plenty of space, a garden for my beloved hedgehogs, feeding birds and other visiting wildlife. My Austrian wife, by contrast had spent most of her life in flats as indeed have the majority of Viennese residents. I confess to some immediate doubts and more than a little trepidation. It seemed a very major and uncertain step to take and the massive physical upheaval it would inevitably create was at the very least, a daunting and unnerving prospect. What to keep? What and how to sell? What to give to charity shops? Little room for sentiment and, for sure, much hard work ahead.

“And yet her tossed-out suggestion, characteristically, had undeniable logic and common-sense to it. I was approaching 80, she two years behind me and we both have had sad experience of those whose eventual move into such an apartment or care-home had been left to when it became a necessity and not a well-considered choice. After all, we are both fortunate enough in our advanced years to still have good mobility and general health. We could scour the market, weigh the advantages and disadvantages and be fully in control of our own decisions. We would be able to down-size because we want to and not because we have to.

“And it was a fact that our large house and garden had become a lot of work and a growing financial burden to maintain at a time when our joint energy levels were rarely equal to its seemingly never-ending demands. Was it not time to leave such stresses behind and to reach out to a renewed, better-managed quality of life that a well-chosen change in environment can bring? I began to edge positively in that direction.

“To cut a long story short, we did it, and what a choice faced us! It seemed McCarthy and Stone had become the new all-conquering M&S.

“Almost two years later we are now very happily settled in our chosen home at Stafford’s Drakeford Court, managed very efficiently by FirstPort and within a welcoming community of residents. We have an active Social Club (until COVID brought a temporary halt) and even a regular in-house journal to which many of us contribute with poems, quizzes, jokes and other interesting snippets. All life’s essentials are within walking distance and we are both thrilled to be where we are. And, as an unexpected bonus I am now back in the very same neighbourhood as my childhood home and the schools where I was educated. My life’s wheel has gone full circle and it’s not ready to drop off the wagon!

“So I can now say to any of the same generation and who may be at this same crossroads in life’s journey, give downsizing an honest thought and if you end up as happy and contented as we now are, you certainly won’t regret it.”