Resident, 87, appears on BAFTA’s ‘For the Love of Film’ shortlist 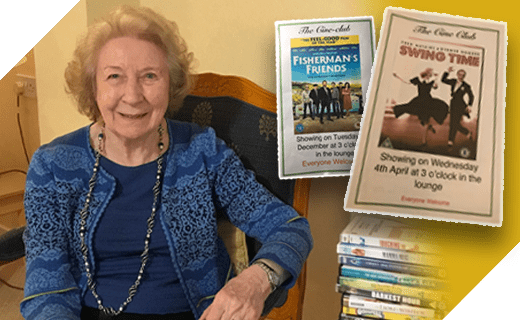 Blog > Real Residents > Resident, 87, appears on BAFTA’s ‘For the Love of Film’ shortlist

Our resident, Lorraine Lake Nepstad, has been shortlisted for a BAFTA for her part in running a film club at her assisted living development.

Following hundreds of entries, BAFTA has announced the finalists for its second annual ‘For the Love of Film’ competition. Nine people from across the UK have been shortlisted by a special BAFTA jury, having been nominated by the British public for their exceptional contributions to their communities through film.

For the last five years, Lorraine, who lives at Homecross House in Chiswick, London has been organising a monthly film club for the residents of the independent living retirement development, managed by FirstPort. Lorraine has also organised a committee to select films for the viewers by vote.

At Christmas and Easter they do a cake and mulled wine sale to raise money to pay for the films. Her energy and enthusiasm are a contributing factor to the retirement home where she brightens the lives of those less able with her love of cinema. She is true inspiration to her family, friends and those who live in her community.

People across the UK were encouraged to submit applications on behalf of those who they felt should be recognised for their remarkable contributions to film within their communities. Nearly 300 applications and testimonials were considered by a panel of industry experts.

Amanda Berry OBE, Chief Executive of BAFTA, said: “We’re proud to shine a light on these dedicated individuals from across the country, people who do what they do purely ‘for the love of film’. Now in the second year of the competition, so many of the people who have been brought to our attention have demonstrated an incredible passion for film in their communities, which reinforces our belief that film plays a vital role in our everyday lives. I can’t wait to meet the winners at the EE British Academy Film Awards on Sunday 2 February.”

The two winners, will be invited along with their guest to join BAFTA and EE at the nation’s biggest celebration of film, the EE British Academy Film Awards on Sunday 2 February, before enjoying dinner and an overnight stay at the Savoy Hotel in London.

The ceremony will be broadcast live, exclusively on BBC One. Learn more about the competition and the short-listed candidates here: https://www.bafta.org/film/ftlof-2020-shortlist

Lorraine concludes: “It all started five years’ ago. We were sitting in the lounge at Homecross House when someone said, “No one uses this here television at all!” So I said, “I’ll try to show some DVDs.

“My friend Tove Sperling was sitting next to me at the time and I asked her if she would help. She agreed. So we both put £50 in a kitty and the Cine-club was born.

“Now, five years later, we are financially independent. We vote for DVDs which are lent to us by residents, or we buy through Amazon. This is financed by parties after the film. At Christmas we had non-alcoholic and alcoholic mulled wine and apple cake, in the summer a Pimms or tea, and lemon cheese cake.

“I was nominated for the award by a friend of my daughter’s and it has been an exciting adventure.”

Good luck Lorraine, from all of us at FirstPort!

Her energy and enthusiasm are a contributing factor to the retirement home where she brightens the lives of those less able with her love of cinema.