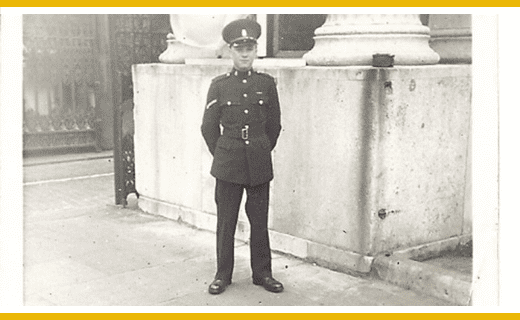 “Coronation day is etched in so many people’s memory as a great day of parties, celebration, expectation and happiness. For me it was a day of pride and duty as I, alongside fellow comrades from the Royal Air Force, The Army, Navy and Reservists, made up an impressive parade that marched behind the Queen’s carriage.

“I didn’t actually see the Queen, but I remember cheering and the excitement of the crowds as a background noise as I concentrated on keeping in time. I also remember it was raining and I had my new uniform on, which had been made to measure. It got wet through and somewhat discoloured by the white coming from the band of the rifle strap I was carrying.

“Afterwards we made our way to a large community room where I was able to take off my uniform, adding it to a large pile in the corner of other discarded uniforms, and put on my usual uniform before heading home on the train. Quite a normal ending to what was an extraordinarily momentous and memorable day.” 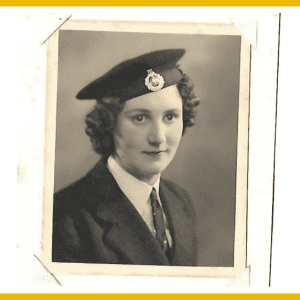 “I worked as a WREN (Women’s Royal Navy Service), serving at the Royal Naval School of Music during the war. I received a Long Service Medal for five years of service, before being drafted to Kingseat Hospital close to Aberdeen. I have very fond memories of my time as a WREN, but I saw some horrendous injuries that were inflicted on many poor soldiers. I will be 100 years old next year, and some of these images are still as vivid today as they were then.

“The Royal Marines Museum contacted me in 1978 asking if I had a photograph I could share of me or the other WRENS for their historical photo library, so I am now part of their exhibition. It was an honour to serve in the Women’s Royal Navy Service. I am incredibly proud to this day, particularly as we celebrate Her Majesty’s Platinum Jubilee.” 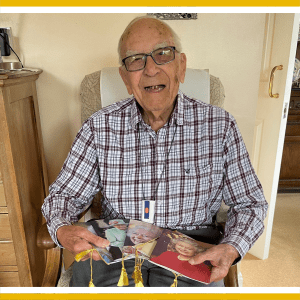 “I celebrated my 100th birthday in December 2021, receiving my fifth card from the Queen. I have been married to my wife, Lilian for 79 years and other cards received are for our Silver, Golden, Diamond Wedding Anniversaries, and then one for our 79th Anniversary – all of which are proudly displayed in my apartment.

“A bit about me…following a stint working in an Engineering company as the company buyer, I joined the Home Guard as a Dispatch Driver from 1939 to 1945. We were used by the armed forces to deliver urgent orders and messages between headquarters and military units – a vital role at a time when telecommunications were limited and insecure.

“In 1947 I was called up to service with the RAF for two years after the Second World War. I later returned to the engineering company before retiring in 1985.”