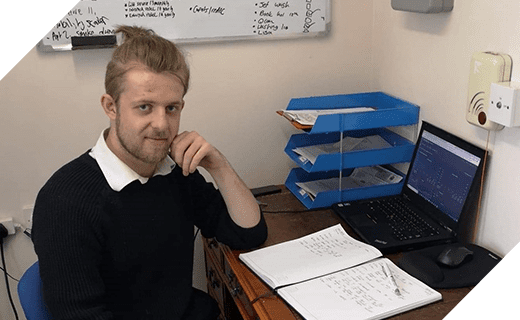 Leaving University to find your first job as a Retirement Development Manager is perhaps not a typical career move for a young graduate, but for Connor Newton, aged 23, it’s been full of surprises.

Connor has been working for our retirement division for just over a year, managing Grangeside Court in North Shields, Tyne & Wear. The average age of our Retirement Development Managers is 57, so Connor is certainly bucking the trend, but that hasn’t stopped him making a big impression with residents and colleagues.

As a young graduate, who had just completed a degree in Environmental Science at Northumbria University, Connor knew a career path in line with his degree subject wasn’t for him. He became interested in the role of Development Manager as he saw it as an opportunity to combine his problem-solving and people skills.

But it wasn’t an easy start for him, with initial apprehension from the majority of the 37 leaseholders at Grangeside Court about his age. “When I first met residents at a meet and greet session, there was uneasiness about my age, which is quite understandable,” Connor says.  “One of the first things a resident said to me was ‘I hope you’re not going to be having any loud parties.’”

As a testament to his hard work, Connor has turned those initial preconceptions around, and he’s gained the respect of the residents. “The residents’ first impressions of me have been transformed,” Connor says. “We have a really friendly relationship built on mutual respect, and they trust that I can help them resolve any issues.”

Before Connor arrived at Grangeside Court, the development’s social life and community spirit was at an all-time low and most residents interactions with each other were limited to their immediate neighbour. Connor quickly saw ways he could make lasting improvements, by energising the coffee mornings and introducing new events such as a monthly Fish & Chip night, regular quizzes and Bingo sessions.

Connor is a firm believer that managing a development is much more than just managing a building, and after his daily building management duties are complete, he makes an effort to spend time with his residents.  “I was very conscious that there are residents living amongst us in this community environment who were still very lonely and isolated because they are housebound or not confident to interact with others,”  Connor explains. “I dedicate time in my day to encourage people to join me for a cup of tea in the communal lounge, or I visit residents in their own flats if they are unable to leave.”

Connor says that the role has helped him grow as a person and an employee. “I have to deal with some pretty intense, and sometimes upsetting, situations like if a resident falls ill and I have to call an ambulance, but I am much more authoritative now.”

Amy Bishoprick, Regional Manager for our retirement division, says: “It’s certainly unusual to have such a young Development Manager, but it’s been remarkable to watch Connor grow and develop in the role to make it his own. He’s gained the respect of all the residents and is making a name  or himself within the business.”

Connor concludes: “This role has changed the way I view my residents’ generation, and I know it’s changed their view of my generation too. It’s been truly rewarding and helped me grow as a person in confidence and ability .”

“We have a really friendly relationship built on mutual respect, and they trust that I can help them resolve any issues.”