Retirement resident is an ‘Artful’ Master! 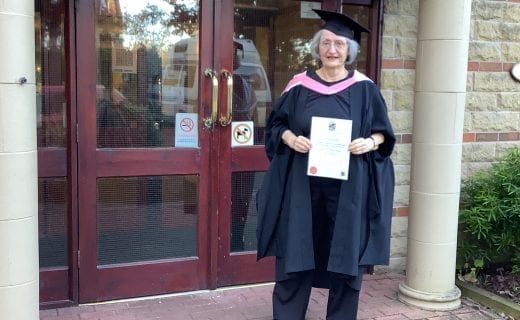 A local retired resident has ‘artfully’ proved the old adage that age is no barrier to learning by achieving a Masters in the History of Art.

Carolyn Hampson, aged 75, and a resident at the FirstPort managed Brook Court development in Salford, received the impressive accolade on Saturday 20th March after spotting an advertisement for lectures.

“I initially joined as an Associate of the University of Buckingham’s post-graduate programme and attended many lectures in London. A very enjoyable experience as the guest lecturers were all eminent experts in various periods of art from AD 1000 to the present day,” said Carolyn. “In fact, it was so enjoyable I found myself being lured into signing up for a full-time MA the following year.”

Her achievement was celebrated via a virtual graduation ceremony on Saturday and Carolyn was delighted to receive her degree (awarded with an impressive Merit), a photograph of which was captured by fellow Brook Court resident, Enid Chisnall.

Carolyn adds: “I’m absolutely thrilled to have achieved this MA. It’s the ‘icing on the cake’ post-retirement, in addition to my Joint Honours degree in German and Spanish, gained eighty years ago with the Open University.”

FirstPort Regional Manager Amy Bishoprick says: “We are delighted for Carolyn; what an achievement! Turning a love of art into a Masters is amazing and we are sure there will be a celebration at the development when the residents are able to.”

Carolyn’s love of the Arts stems from her interest in German Expressionism, an early twentieth century art movement, characterised by innovative, bold, and bright colours to reflect emotion and expression.  She also paints in her spare time and has recently contributed two of her pieces to the ‘Incognito’ art exhibition run in London at the Royal Over-Seas League, a self-funding organisation supporting Commonwealth art, music, and welfare projects. 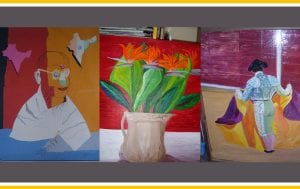