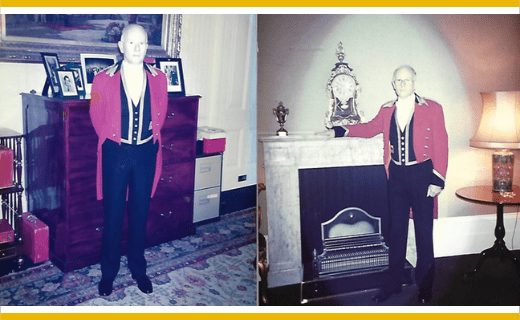 As people up and down the nation and beyond begin their celebrations to mark Her Majesty The Queen’s Platinum Jubilee, residents at FirstPort’s Poplar Court in Lytham St Annes have been reflecting on their own Royal connections.

Pat McEvoy’s husband Bruce Craske (feature picture) worked at Buckingham Palace for 10 years between 1983-1993 as a Livery Porter at the Privy Purse.

Door. Bruce, who passed away in 2015, had many great memories from his time in the role which Pat has kindly shared with us.

She explained that Bruce’s role was similar to that of a receptionist – he was there to inform staff of the arrival of anyone important who had an appointment with any of the Royals, and he would sometimes take them up to their offices.

Pat added: “He met a lot of important people – the King of Spain, President Bush Jr., the Emir of Qatar. He also did security, and on the weekends, he would remain at the Palace.”

Pat explained that while Bruce was working for the Royal Family, she remained with her daughter at their home in Liverpool as the couple did not want to disrupt their daughter’s schooling.

It also meant lots of exciting trips to various Royal households. She said:

“I joined him at the staff ball every other year. He lived in the Palace, and he had his own room on the top floor. I was allowed to stay with him on occasions.

“He didn’t tell me what went on, but he did tell me he met the Queen with her wellies and raincoat on coming in with the corgis very wet and offered to help dry them.

“I stayed in accommodation in Windsor for a weekend and also Sandringham just after Christmas one year. The Queen wasn’t there at the time, but I saw where they had their Christmas dinner.

“He did tell me how William and Harry were very polite and well-mannered and if he opened the door for them, they would always say thank you.”

Carla’s husband Franco Toffolo was a world-renowned Glassman, who on numerous occasions made special glass items for various events with the Royal Family. 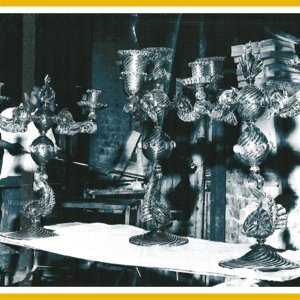 Franco, who sadly passed away in 2013, received various accolades for his workmanship throughout the world and the couple shares many proud memories of his work with the Royal Family.

“In 1990 the McLellan Galleries in Glasgow was reopened following a large fire. The Galleries’ management asked Caithness Glass to design and make a chandelier for the central cupola.

“This task was handed to my husband Franco Toffolo, who was at the time the top Glass Maestro at Caithness Glass.

“He designed and created the chandelier in the factory in Perth. It was so large that the fire brigade had to remove part of the dome to install it.”

In November 1990 the Galleries were reopened by Her Majesty Queen Elizabeth II and both Franco and Carla Toffolo were invited to the opening.

“We arrived at the Gallery and my husband was introduced to the Queen as the designer and maker of the chandelier.

“When he was shaking her hand, she commented that she remembered him because he had also made a glass piece for the Queen Mother on her birthday. She then shook hands with me, as did Prince Philip.

“It was a great honour and a moment that I will never forget. I still treasure three letters received from Buckingham Palace on the subject of a set of Crystal Candelbra that my husband also produced for her Majesty in 1975 and are still at Buckingham Palace today.”

Both Carla and Pat will be joining the residents at Poplar Court to celebrate the momentous royal event.

“We are well into the organising of our Queen’s 70th Jubilee party at Poplar Court. As there is so much going on nationally, we decided to have our festivities Sunday evening 5 June.

“All those involved in the preparation know what they are doing on the day, from providing the buffet to the Royal Quiz and music.

“The decorations are going up a week early to get everyone in the party spirit.”