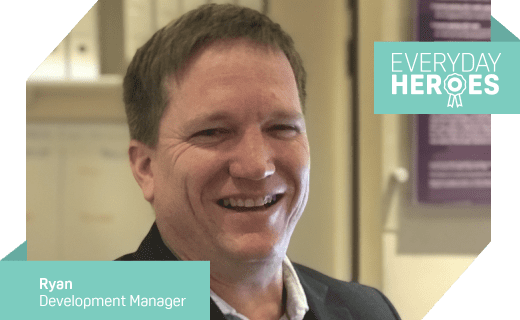 As they go about their daily work, our Property and Development Managers are Everyday Heroes. They’re often the first port of call, have wide-ranging responsibilities and are focused on making sure their residents are happy.

Ryan, our Development Manager, ticks all these boxes and more. His unfaltering dedication to looking after his residents and proactively solving issues was recently highlighted when there was a major fire at his development.

A fire at the worst possible time

As if a development fire is not bad enough for residents to have to go through, the fact that this fire occurred four weeks before Christmas intensified the situation greatly.

The fire was started by a cooking accident, and quickly became a major and terrifying ordeal for everyone. The fire was so serious that it took 30 firefighters and six fire engines to tackle the blaze.

Ryan quickly responded to his residents in their hour of need. He was on site immediately after being notified so that he could support them and take a lead in the events that followed.

In the initial hours after a crisis there’s a need to be both practical and sympathetic, and Ryan balanced this perfectly. He fully understood the worry his residents felt and made sure they were updated regularly to allay any fears and help them feel more in-control of the situation.

Ryan says: “Many of my residents were extremely overwhelmed by what was happening; they didn’t know who to speak to or what was going to happen next. I made sure I spoke to everyone involved so I could keep my residents regularly updated and provide them with some peace of mind during this really difficult time.”

In addition to this emotional support, Ryan was pragmatic too, such as making sure shower facilities in his office were available for anyone who needed them.

Getting people home for Christmas

The residents whose flats were affected by the fire were provided with temporary hotel   accommodation, and Ryan made it his mission to make sure they could return home as soon as possible.

“I notified our health and safety team, our insurance company and the council’s housing department straight away. I knew that the sooner I made these calls, the sooner we could get to work on making the development safe for them to return,” explains Ryan.  “The last thing people want is to be away from their home over the festive season, so my team and I worked round-the-clock to make sure we could meet this deadline for as many residents as possible.”

Ryan’s hard work paid off and all but three flats were ready for a pre-Christmas return. Sadly, the three flats that couldn’t be returned to had sustained significant fire-damage and required intensive repair work.

Ryan once again went above and beyond to support these residents. “One of the families had only just moved in with their new-born baby and would have struggled to replace their possessions, so I set up a fund with two local councillors and we managed to get them everything they needed. They were so grateful.”

Ryan concludes: “Sometimes my job is about putting myself in my residents’ shoes. I knew, if it was me going through this, I would have wanted to know that there was someone who was doing everything they could to support me and get me back home for Christmas, and that’s what I did. I love my job and making my residents happy, especially after they had been through so much.”

Has your Development Manager or Property Manager gone above and beyond? If you’ve received a great service and would like to leave a review, please visit bit.ly/ratefirstporteh