Trip of a lifetime for Chris 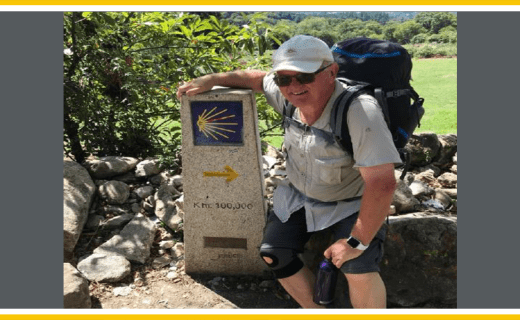 Blog > Real Residents > Trip of a lifetime for Chris

The Camino de Santiago is a pilgrimage of Medieval origin to the Cathedral of Santiago de Compostela in Galicia, in the Northwest of Spain.

Today, more than a pilgrimage, it is a unique experience and trip of a lifetime that attracts thousands of people from all over the world; including Chris Mathews, from Briary Court in Isle of Wight, who joined the adventure in the late summer of 2020.

Chris first became curious about the Camino while on a cruise with his wife, Yvonne. They stopped at a large port very close to Santiago where a shore excursion was offered. Chris was not interested then, but later in the year, the BBC ran a series about celebrity pilgrims walking the Camino de Santiago. Because of the mention on the cruise, they watched the programme and thoroughly enjoyed seeing the scenery and the challenges of the celebrities undertaking the walk. The little seed had sprouted.

“Last summer the UK was in lockdown until early July, but France and Spain were still open, so I decided to head off in August to see about doing a little of the Camino,” explains59-year-old Chris.

The couple agreed that while Chris walked sections, Yvonne would drive their camper van and they would meet up each night, so he always knew he would have somewhere to stay, wash his clothes and have his meals.

Chris decided to start in Saint-Jean-Pied-de-Port (France), as he wanted to cross the Pyrenees on foot like many allied soldiers and airmen did to avoid being captured during WWII.

The Camino from Saint-Jean-Pied-de-Port to Santiago is 783km (around 500 miles). The terrain varies from high and steep mountains to flat dry plains and as equally varied can be the weather. Chris walked it in August, September and October experiencing extremely hot temperatures up to 40 degrees but also days of torrential rains. “My favourite walks were in the mountains as I love the sweeping vistas and the barrenness of the tops, despite at times these also being the hardest of walking environment,” he says.

There were several challenges facing him, but none was more prominent than his pre-existing knee injury taking its toll on these hikes. “I broke my leg in a motorcycle accident and it has left me with a ‘dodgy knee’ that occasionally still gives some considerable pain”, explains Chris, who had to alternate between nine pairs of shoes during his walk.

Although the traditional purpose of the pilgrimage to Santiago was all about religion, for Chris it became an exploration of culture. From visiting the iconic Cruz De Ferro (The Iron Cross) to the Royal tombs in Nájera and the free wine fountain in Irache, he discovered the classic Spanish culture through his journey.

Another highlight of the trip was meeting other pilgrims along the way. “For many, the major attraction of the Camino is finding other like-minded people on the walk and the social interaction with them in the evenings, usually over some form of shared meal or a delightful glass of wine.”

The natural finishing point for the Camino is the Cathedral at Santiago but this was not the case for Chris, who decided to do the return trip too. “I was enjoying the walking so much that I decided to walk back to Saint-Jean-Pied-de-Port,” he explains.

The couple then agreed that Yvonne would travel to southern Spain in the meantime, and they would meet again in France. Before returning to Saint-Jean-Pied-de-Port, they visited Finisterre, the pre-Christianity end of the Camino. “Finisterre was a superb finishing spot for Yvonne. It was great to see the sunset at the ‘end of the earth,” says Chris.

The final arrival at Saint-Jean-Pied-de-Port, at the real end of his walk, was magical in its own way as the couple met at The Pilgrim’s Office for his final stamp for the ‘Credencial del Peregrino’. “This Pilgrim Record was an essential indication of how much of the route I actually did, as I could collect a stamp from cafes, cathedrals and other places along the way to be able to show that I had completed it!”.

My favourite walks were in the mountains as I love the sweeping vistas and the barrenness of the tops.