Trip of a lifetime for our intrepid resident cyclist 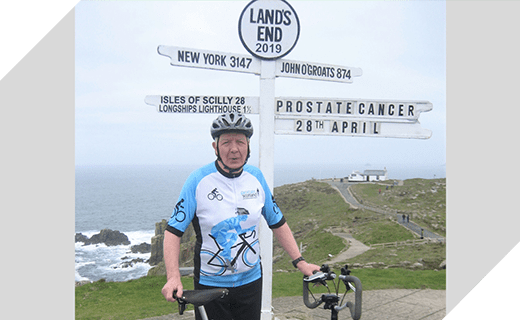 72 year old Andy Wilson from Castle Court, Bothwell, near Glasgow is not your average Grandad. He has just completed the Land’s End to John O’ Groats cycle route, covering some 1,200 miles.

If that was not challenge enough, Andy decided to complete the route on a Brompton folding bike. The trip was completed solo by Andy, with no backup support and was self- funded, with him staying in B&Bs and hotels along the route. He used National Cycle Paths (hence the additional miles).

Andy completed the gruelling challenge in 25 days for his chosen charity, Prostate Cancer, Scotland. He was cheered on all the way by his fellow residents at Castle Court, a retirement development managed by FirstPort Scotland where he has lived for 15 years.

Through the 40- 70 miles Andy covered every day, he experienced some amazing highs with stunning scenery and tranquil surroundings. “Some days I never saw a single person, but I did meet my fair share of ponies and cows,” Andy said. “It was such a privilege to get back to nature, have time to think and soak up the sun when it made an appearance.”

But the days the sun didn’t shine go down as Andy’s most challenging. “The day that particularly sticks in my mind as being the hardest was actually one of my final riding days,” Andy said. “The rain was relentless and it was bitterly cold with 40 mph winds. I was soaking wet and couldn’t feel my hands, but I would never have given up.”

On the worst days the support Andy received from his family and residents at Castle Court was the boost he needed. Castle Court residents were tracking his progress via a map on the wall and a piece of coloured twine they moved along as his journey progressed. Andy’s son, Alan, and Development Manager, Bill Finnie, were always on hand with a pep talk on the toughest days, telling him to keep plodding on!

Andy was surprised and delighted to return to Castle Court to a welcome committee of over 20 people and the news that he has raised over £1,000 for his charity, something that is set to increase with a fundraising event planned at the development in early July.

“It was a trip of a lifetime,” says Andy. “I’m overwhelmed by all the support I’ve received and the money I have been able to raise. It nearly makes me want to do the whole thing again, but for now I plan to fold up my bike for a while and jump on a bus instead!”

Roger Bodden, Regional Manager for FirstPort Scotland, said: “Andy’s achievement is fantastic. We know that residents living in our retirement developments love to keep fit and active, and I hope Andy will be an inspiration to them.” 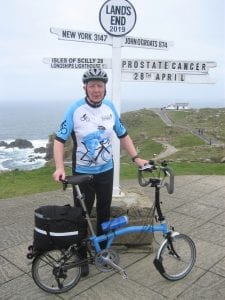 The rain was relentless and it was bitterly cold with 40 mph winds. I was soaking wet and couldn’t feel my hands, but I would never have given up.