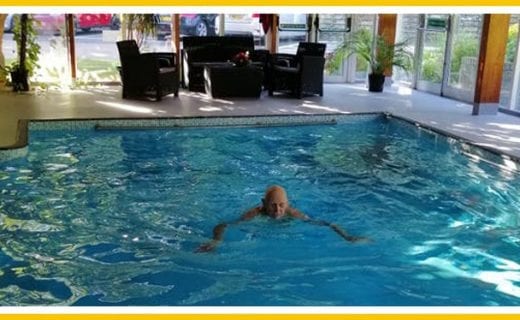 One of our residents recently marked his 100th birthday by completing a swimming challenge, to raise money for charity. This inspiring, heartwarming story has been shared by news outlets across the country, and we are delighted to see Bill’s fantastic achievement (and milestone birthday) getting the celebration is deserves!

A 100-year-old man from the Isle of Wight swam more than 100 metres on his birthday to raise money for the NHS.

Bill Smith tackled the challenge in a pool at the Briary Court retirement facility in Cowes on Saturday, surpassing his initial 100m target with a 136m swim and raising over £1,300 for NHS Charities Together.

The retired chef, who has lived on the Isle of Wight all his life, has been an avid swimmer since he was five-years-old and has a dip in the pool every morning at 7am.

He keeps track of how many widths he has completed by putting spoons in bowls on the side of the pool, placing one per journey back and forth.

“It’s been a tough year for the NHS because of the pandemic and I’m so glad to do something that doesn’t just benefit me,” Mr Smith told the PA news agency.

“To celebrate my 100th year I wanted to do something to give back, I thought about donating blood but was unfortunately too old so decided to do a sponsored swim for the NHS instead!

“I encourage everyone to just dig and give what they can to the wonderful NHS.”

The centenarian donated £100 of his own money to the cause, one for each of his 100 years, for which he has also received a letter from the Queen.

Cherry Kingdom, development manager at Mr Smith’s retirement facility, which is managed by Firstport, said: “Bill is a total inspiration and doesn’t let anything faze him.

“We are so proud of Bill here at Briary Court and it’s so lovely to see residents using our facilities to do some good.

“Myself and all of the other residents here have enjoyed seeing Bill help the local community and would love to be as energetic as him at the age of 100!”