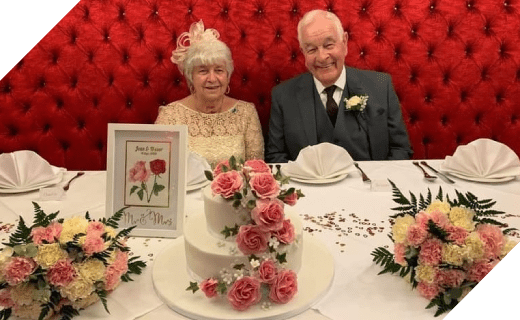 At Kingswood Court in Chingford, a friendship blossomed between two of our customers, Trevor, 76, and Jean, 78, resulting in a wonderful wedding last month.

Jean moved to Kingswood Court after sadly losing her husband 11 years ago. She couldn’t manage her four-bedroom house on her own, so made the decision to move into the retirement development which was just across the road.

It was here that she first came across Trevor, who was a frequent visitor of his sister who also lived at Kingswood Court.  At first, their encounters were brief and unplanned, a trip to the supermarket where they caught each other’s eye or passing in the development’s corridor.

When Trevor’s sister sadly passed away he decided it was time for him to downsize, swapping his Batchelor pad for development living.

It wasn’t until Trevor had moved into Kingswood Court that Jean and Trevor properly met at a bingo afternoon hosted in the communal lounge.  It didn’t take them long to hit it off and soon Trevor, who always turned up late for Bingo, was seeking out the spot next to Jean on a weekly basis.

When Trevor invited Jean to go for a walk to the local beauty spot,  he claims Jean thought it was a date, but that he just wanted to get some exercise! It was on this walk that they realised they had similar interests having both lived and worked in Hackney, and they got on so well.

About a year later, Trevor decided to pop the question and ask for Jean’s hand in marriage. According to Trevor it was a low key proposal, with him saying if he had got down on one knee, he would need someone to help him get back up!

Trevor and Jean tied the knot on a perfect sunny day on 19 September 2020. Despite Coronavirus limiting the number of guests, they had the most wonderful day and were even able to share the ceremony with Jean’s son all the way in Las Vegas, via a middle-of-the-night video link up.

They returned to their apartment after the reception to rose petals scattered along the hallway and red hearts on the bed, courtesy of Jean’s daughter.

Jean’s son and daughter and four grandchildren are delighted by the match, despite the fact that they are all Tottenham supporters and Trevor is an Arsenal fan, something they say they will forgive him for. 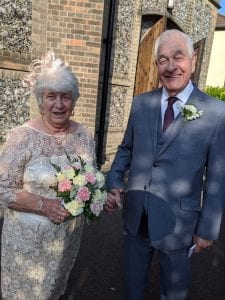 Both Jean and Trevor are enjoying life as newlyweds. Trevor’s only complaint is that he prefers his own cooking to Jean’s!

For those considering making a move to a retirement development, they have nothing but encouragement. Jean enjoys an active social life within the development in normal times and has encouraged Trevor to join in more with the development’s events’ programme in between his bowling club visits. Both also value the maintenance-free lifestyle independent retirement living affords you.

More than anything though, they are thankful for the opportunity it provided for them to find each other.