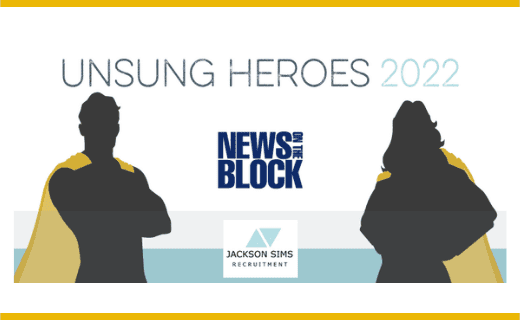 FirstPort colleagues have been recognised as being News on the Block’s Unsung Heroes for 2022.

The awards, which were set up in 2020 by News on the Block magazine, are in place to recognise and celebrate those in the property sector who go above and beyond to help make residents’ lives easier.

All the 2022 Unsung Heroes were invited to a drinks reception in April to celebrate the win.

Our winners are as follows:

Development Manager Julie regularly goes that extra mile to make sure all residents have what they need to lead a happy and comfortable life. This has been proven in Julie’s actions with resident, Jean. Last November, Jean found she would need an eye operation – but it was not guaranteed to fix her rapidly failing eyesight. This meant that she faced the prospect of not being able to physically see her daughter and granddaughter, who live in Paris, and who she hadn’t seen since before the coronavirus pandemic. After Julie found out the news, she helped arrange Jean’s trip to Paris in time for Christmas and before the operation. She organised Jean’s full travel itinerary, including her travel to the airport, assistance at the airport, and travel in Paris. Julie made printed step-by-step instructions for each stage of the journey, as well as Covid-19 tests to comply with French legislation. This was such a support to Jean, who says without Julie’s help she would never have been able to make the trip.

Adrian has worked tirelessly on a very complex multi-area refurbishment project at his development, while also supporting residents throughout the pandemic. Despite facing repeated challenges that have arisen from the refurbishment of the property – including various leaks and defects – he always works to find a solution and ensures that all parties understand what is happening and why.

Alongside this, Adrian supports his fellow Development Managers by sharing his expertise and knowledge. Even when he’s busy on his own site, he’ll always make sure he can support residents and other managers in the event of an emergency. Adrian is an asset to both FirstPort and our residents.

Through a challenging year, Bill has been there every step of the way to offer continued support to residents and colleagues. The development that Bill manages has had some structural issues over the past year which have caused great concern for residents. All the way through, Bill has been a rock to residents, making sure they were safe and comfortable while the essential work took place. Bill made sure he had all the information available to give to residents so that he could be there to offer support and guidance when they needed it most. He has also organised two large concurrent Section 20 projects on the site which have involved him organising alternative accommodation for residents who had to temporarily relocate whilst work has been completed.

As an experienced Development Manager, he has also found the time in his busy schedule to assist and help his colleagues with operational and technical system issues, including training them on new computer programs and holding team-based learning surgeries to share his wisdom.

What is truly remarkable is Bill’s determination. He has been very open about facing his own personal struggles with mental health and has taken time to undertake therapy for this. His work colleagues have been there to support his journey all the way with Bill coming back a stronger individual, showing great personal belief and character.

As many residents and colleagues will say, Jacqui is part of the fixtures and fittings at Elliott Court, and it wouldn’t be the same without her. Keeping the developments clean and safe has been even more of a priority following the Covid-19 pandemic. Not only did Jacqui go above and beyond to keep residents safe, but she also provided extra support including running errands to make sure residents were able to get groceries and changing her working hours to accommodate the needs of the development during the lockdowns. Whatever lands at her feet, she gets on with it – and she will never hesitate to offer a helping hand. In just one example, when the development manager was on sick leave, Jacqui turned up to the development out of working hours to secure a window in an unoccupied flat. Her role may be seen as a hidden part of the team, but her continued dedication to helping colleagues and residents never goes unrecognised.

Jo has set a wonderful example of driving community spirit at Perrin Court and really goes out of her way to minimise the feelings of isolation for residents – and this view is widely shared among the residents at Perrin Court. Jo has transformed the development into a bubbly and caring retirement complex. She supports and encourages a wide range of social activities at the development which has included bingo evenings, cream teas, book and clothing exchanges, singing by Salvation Army and beaver groups. In addition to this, in her own time Jo has put together Easter and Christmas goody bags for each resident. What underpins all of the above is Jo’s positive, bubbly, and caring attitude.

Lesley was unfortunately diagnosed with cancer several months ago, which was quickly followed by invasive surgery and radiotherapy. Despite everything she’s been through, she has remained her cheerful self and continues to put residents and her work first. Nothing is ever too much trouble, and Lesley is always there to support residents when they need it most. On one occasion, she went over and above to help a resident who had just lost her husband and was grieving. The resident’s flat had a water leak and Lesley was there to clean up and help arrange a contractor to fix the issue. Lesley’s unwavering dedication and passion for her job is shown through the great work she does to make the development a welcoming and inviting place to be.

Maureen is friendly, warm and likeable, and residents regularly tell us about the brilliant work she has done to transform their developments. In 2021, she took on a managerial role after the manager at the time became ill and sadly later passed away. During this time, Maureen not only supported the residents through the shock but helped raise their spirits.  On another development she transformed a neglected site into an updated and welcoming living environment. Maureen always has the resident’s best interests at heart. She makes sure residents are kept well informed by regularly writing newsletters to update them on the latest development news and guidance.

Pauline is always ready to help and provide assistance where needed. In 2021, she stepped up to the challenge when a manager was needed at an additional site. This meant she was working in one development in the morning, and another in the afternoon. She never complained and instead she continued to bring forward great ideas for improvement at the second development while also winning all the residents over with her bubbly personality. Pauline introduced regular newsletters for residents and made sure they got involved in activities and events.

When a serious fire broke out at a retirement development, the team effort in the initial days following the fire was nothing short of exceptional. All hands were on deck to make sure the residents from the 61 flats were safely evacuated, comfortable and reassured that everything was in hand.  Some of the team travelled from the other end of the country to help, staying away from home in the run up to Christmas. They worked night and day, chasing materials and driving around the country to pick up supplies that were not available locally. The team even approached local charities and the local Sainsburys to see if they could help, resulting in a £1,000 donation of Christmas food and treats as well as 60 care packages for the residents.

Cristian fit straight into the role of concierge since joining the team in July 2020. His previous experience working at a bigger site has proven extremely valuable, regularly offering colleagues with helpful insights to make work more efficient.  2021 has been extremely busy for the team and Cristian has not shied away from the challenge. A major works projects took place last year which meant the concierge area had to be temporarily moved. As a day concierge, Cristian helped to set up the CCTV and intercom system in temporary office in a timely and efficient manner.