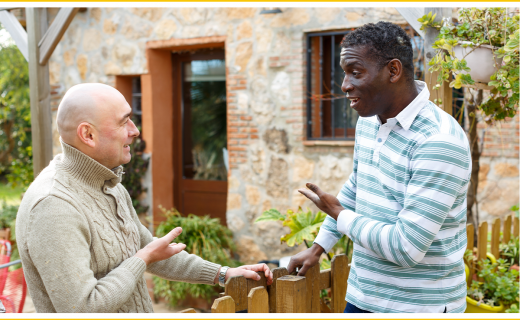 Proving that loving thy neighbour is more important than ever, nearly one in three (32%) Brits would pay a £10,000 premium for a property if it guaranteed good neighbours, while 32% wouldn’t consider moving because they get on so well with those living nearby.

We recently conducted a survey of 2,000 adults that found Brits are now connecting with their neighbours on an almost daily basis with nearly a quarter (23%) admitting they speak to their neighbours more often than their family. Following a year of local lockdowns and restrictions, almost a third (31%) say they have struck up a friendship with a neighbour in the last 12 months.

According to our findings, social media has been a major catalyst for people getting to know others in their local community and the people who live within it. Swapping the garden fence for Facebook, Brits receive or exchange an average of five messages a week on apps, social networks or email with their neighbours. Over half (54%) message them more now than before the pandemic, and a third (33%) say apps and social networks have helped foster a sense of community.

Facebook is the most popular neighbourhood network with over a third (33%) connecting locally via the platform, with WhatsApp a close second (29%).  Three in ten (30%) said using online platforms has helped tackle crime in their area, and four in 10 (45%) said they feel safer having a strong neighbour network around them.

The top ten cities with the friendliest online communities**

David Young, Chief Operating Officer at FirstPort commented on the findings: “It’s clear from our research that technology plays a significant role in strengthening not only neighbourhood friendships, but neighbourhood safety. We understand the pandemic has been a catalyst in bonding our communities and people now value neighbourhood connections more than ever. As a property manager, we encourage and support our residents to build relationships using community forums, and we’re investing in our own technology so that we’re responding to how our customers want to interact with us too.

“Despite the increasing number of neighbours connected online, we understand that not everyone uses tech the same way. The results show that face to face connection is still as important as ever as nearly a third (31%) would like to catch up with their neighbours over food and drink. Our aim is to make sure our residents have options that allow them to connect with their communities in the best way for them and this extends to communicating with their property managers, so we are here for them however and whenever they need us.”