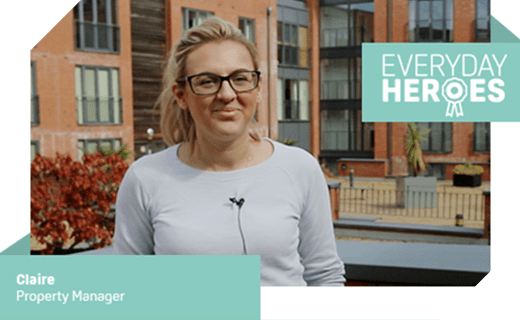 Our Property Managers really are everyday heroes or, as we like to call them, FirstPort Everyday Heroes. Sometimes buildings can be complicated things, and if something goes wrong, like the roof of a development starts to leak, they’re there to help put things right.

Today we want to tell you a story about Claire, one of our Property Managers and a FirstPort Everyday Hero, who quickly came to the rescue when one of the developments under her care was flooded by a storm.

During one of the May bank holidays last year, Claire was on annual leave, enjoying the rugby at Twickenham with her husband when it started to rain.

Claire may have been ‘off-duty’ and miles away from her development, but that didn’t mean she wasn’t thinking about it. After seeing bad weather reports for the part of the country her development was situated in, Claire contacted her Resident Development Manager at 4.30pm who told her the development was under about 1ft of water.

With two months of rain falling in just six hours where her development was situated, Claire feared the flooding would only get worse with a canal nearby the development.

And unfortunately, Claire’s concerns were confirmed when the canal did eventually burst its banks

“The development is located in a village that’s surrounded by a canal and, because the nearby lock was shut, it flooded the entire village,” explains Claire.

Claire was miles away, but managed to return to the village by around 7.30pm. By that point, everywhere was under water and the residents’ underground car park was flooded. Eight cars were submerged in around 4.5ft of water.

However, the first challenge for Claire was physically getting to the development…

“The village had been totally cut off, so I had to park about half a mile out and then wade through 3ft of water to get to the site. And when I finally got there, the residents from our 97 apartments were all stood outside and the car park, office, pump room, lift, communal staircase and residents’ storage lockers had all been flooded”, explains Claire.

“I immediately knew I had to find contractors to pump out the water, but when I contacted them, they were all busy helping other people who’d been flooded.”

Claire knew she had to act fast, so she called the fire brigade. They contacted the Canal & River Trust and arranged for the lock to be opened so the floodwater could be pumped back into the canal.

Claire stayed on site until 3.30am. By that time, the fire brigade had pumped away around 2ft of water.

The next day, Claire was back again, despite only getting a few hours’ sleep.

“Fortunately, the rest of the water had drained away overnight, but we were left with our next challenge – raw sewage all over the car park. There was devastation everywhere,” says Claire.

“I reached out to suppliers and connections, explaining what had happened and appealed for help.” Just a few hours later, the car park clean-up was well underway.

Yet more challenges lay ahead

With the pump room being flooded, there was no access to clean water, so Claire arranged alternative accommodation for her residents.

“While we managed to clean the car park and get rid of the flood-damaged cars by the next day, some areas, such as the pump room, office and lift, couldn’t be rectified as quickly because they needed to dry out or we were waiting on specialist parts for them to be repaired. The lift was immersed in around 10ft of water at one point,” says Claire.

“I arranged through the insurance for 150 people to stay in hotels for around 12 days. Residents from about 10 of our apartments decided to stay, so I organised literally hundreds of bottles of water to be brought on site every day so they had fresh, clean water to drink and wash up in.”

Everything was back to normal at the development just four weeks after the bank holiday downpour, something we’re sure wouldn’t have happened without Claire’s sheer commitment and determination to put things right.

“There’s nothing else I could have done, I literally gave my all. I was on site for 16 hours a day for the first week,” concludes Claire.

“I’d do it all over again if I had to. I really was just doing my job and focusing on trying to get everything back to normal for my residents as quickly as possible”.

“Being a Property Manager and working for FirstPort is extremely rewarding, I love the company and want to be a part of the team until I retire.”