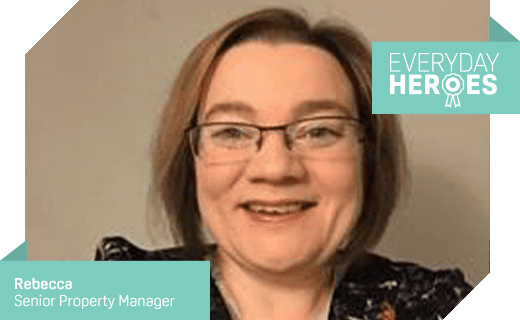 Our Property and Development Managers really do deserve their FirstPort Everyday Hero status because, more often than not, it’s their quick-thinking, composure and organisation that makes sure issues – big or small – are swiftly taken care of so our residents can feel safe and happy in their homes.

Meet Rebecca, who’s been with us for 14 years. She loves the fact every day is different and takes great pride in hearing from residents about how we’re making a difference to them.

…It was from the police to say one of her developments and the surrounding area had been evacuated in the early hours of the morning due to a serious incident.

The entire street near the development had to be closed and a number of police officers had been injured following reports of an alleged chemical hazard. Around 60 residents had been evacuated in their pyjamas and taken to an evacuation centre at a nearby college so that the police and fire brigade could carry out their investigations.

“It was a really serious incident. We were told that a number of police officers had to be taken to hospital after coming into contact with a chemical, and everyone was asked to leave their apartments at around 5am,” explains Rebecca.

“As soon as I heard about the incident I made my way to the evacuation centre to meet my residents. Understandably people were scared and anxious and whilst I didn’t have all the facts straight away, having me on site managing the situation was a big relief to them.”

Keep calm and carry on

One of Rebecca’s priorities throughout the incident was to make sure her residents were kept informed of what was happening at every stage.

“Communication is key during situations like these. Even an update saying, ‘there’s no further news at this time’ is welcomed because at least they know someone is checking,” Rebecca said.

“I sent digital updates to our residents who are registered for Your Property Online – our online customer account service portal – and kept everybody in the evacuation centre updated too. I was on hand to give practical support, like providing food and drink. There was a lady with a young baby who I was also able to help. It was really important to me that everybody felt reassured and remained calm.”

It was Rebecca’s pro-activity and communication skills that helped make sure her residents returned back to their homes quickly.

“I was the key connection between the fire service and the various different letting agents,” explains Rebecca.

“Having me there to manage the different teams involved meant we could move quickly to gain access to the different apartments so they could be inspected and aired out. It would have taken much longer to have done this if I hadn’t been there to coordinate it.”

The fire brigade and police had completed their operations and confirmed the building and surrounding area was safe for everyone to return to.

“All of my residents left their homes in their pyjamas at around 5am in the morning and were still in their bedclothes at around 8pm that evening, which is when they were able to finally go back home after a long and eventful day,” concludes Rebecca.

“It certainly wasn’t the sort of thing I was expecting to deal with when I woke up that morning, but as shocking as it was, I’m really glad I was there to support my residents at this time of uncertainty – that’s what we’re here for!”