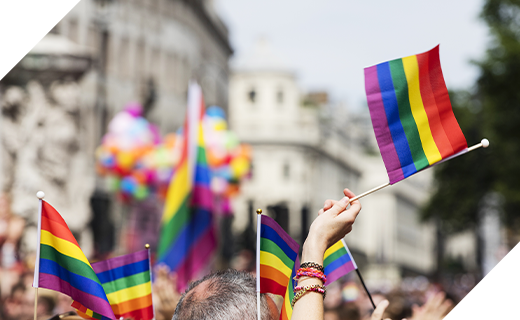 To mark the start of ‘Lesbian, Gay, Bisexual and Transgender (LGBT) History Month’, our Development Manager, Guy Hunter, gives us a fascinating overview of the gay rights movement and explores how businesses, like FirstPort, have reacted to it.

The topic of history usually refers to a period of time, long since passed and largely forgotten about – something that has stopped happening!  Well I won’t bore you with chapter and verse on the minutiae of legislation… but for me, the pertinent question when it comes to the LGBT movement  is not about past change – but what is changing now and are we ready for the next chapter ?  In some instances, I think we have only just begun.

In 1981, I attended my first Gay Pride march.  It wasn’t the Mardi Gras carnival that nowadays is a celebrated event around the world. No, in the 80s it was a more sombre affair and counter demonstrations were actively encouraged, forcing us to run a gauntlet of hysteria and abuse. (Note: the first march was in 1970 when a mere 150 people attended).

It has been a slow march towards equality and, since then, the Gay Rights movement has extended its realm to incorporate anti-discrimination against a variety of gender related issues.

The modern gay movement started in earnest with the stonewall riots in New York (1967) following a ban on ‘congregation’. The gay rights movement was born and became a force to be reckoned with after notable influencers of the day added their voice (without social media) and gave the movement greater credence.

During the 80s, gay and lesbian culture melded together. Although there was no legislation against lesbianism, there was an empathy between communities and strength in numbers.  This developed the campaign culture and ramped up support.

And then came the Pink Pound. A term coined by the advertising Industry that proved to be a powerful economic driver supporting diversity and equality. Corporations and Advertisers actively chased after, and exploited, the benefits of attracting the disposable incomes of gay men and women.

And seemingly, in a relatively short space of time, with some notable landmark rulings, the crimes of homosexuality have been decriminalised, the ages of consent lowered, civil partnerships have been enshrined in law – and now marriage.

Buoyed by success in achieving positive change, strategies supporting the original movement have been extended to incorporate a wider mix of lifestyles and genders. The movement now embraces people who previously had no platform on which to campaign and seek recognition.

But does anyone fully understand the shifting sands and the shift shaping mnemonics these days?

There are so many options. It seems the choice of being yourself, in whatever shape or guise, seems to be endless. This has been liberating for some and very confusing for others.

This can be a hard lesson for cultures and corporates to adapt to. Companies, like FirstPort, have been active followers, introducing positive HR policies to enhance equality, thus enabling its people to work free of discrimination.

This is a far cry from my informative years when I faced harassment and bullying on a daily basis. At work, I used to lead a double life to survive personal and corporate bullying. I’m also convinced I wouldn’t have had the fantastic careers steps to date without hiding my true self.

Today is thankfully different. FirstPort actively challenge discriminatory behaviour and that was one of my deciding factors when joining. I also owe a ‘huge respect’ to the retired residents at the retirement development I manage who have been unquestioningly supportive and welcoming to myself and Robert, my fiancé. That in itself feels like progress!

One cannot deny the positive elements of freedom and inclusivity the gay movement has brought, but how is this all going to end? I think, there is more history to be made – maybe we have only just begun?  I’m not sure what the LGBT future holds, but one day I hope we have enough letters to spell ‘We are all Human’.