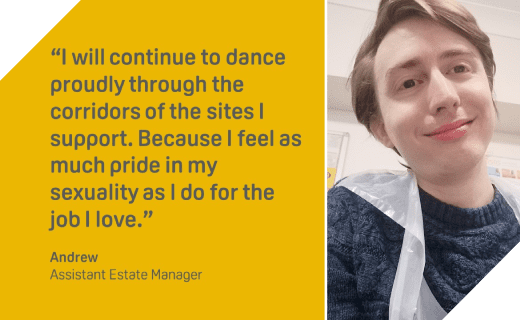 As we enter ‘Pride Month’, our Retirement Assistant Estate Manager, Andrew Lee, discusses the history of the term ‘Queer’ and how a once derogatory term has now become a celebrated descriptor of his identity, one he is proud to share with his residents.

Pride is a complicated concept for many queer people, as is the wording we use to describe our identities. I have, as have many people I know, chosen queer as the word I use to describe my identity. Many, like me, find the acronym LGBTQ+ (Lesbian, Gay, Bisexual, Transgender, Question, Other) that is often used to describe us, to be rather unfair to those in the “other” category. We decided to dispense with acronyms that isolate us into smaller groups and instead have taken a word with a complicated history.

To be queer in its original definition was to be “strange, or odd”. It developed from that definition to mean homosexual men. It was meant as an insult, and for many years it was. In academia, in the early ’90s, the study of gender and sexuality within culture became known as Queer Theory and it is from this meaning that we take its usage.

Queer existence stands in opposition to heterosexual norms, or heteronormativity as we academic types call it. Marriage and children – two staples of heterosexual normality – were until recently not available to queer people, and some of us, even now, choose to opt-out of these ideas. We stand strong in the face of such oppression. That we can say loudly, how proud we are of our identity. I have had many discussions with my residents on many of the sites I have served about my sexuality. I talk about it openly as I think it is not only an important aspect of who I am but also allows me to show some older residents what ‘queerness’ looks like up close. Not dramatised on television, but as a real human person, who also takes great pride in looking after their homes.

I have worked on sites with residents who describe themselves, as I do, as queer. Growing up, I was made to feel unwelcome, unsafe, and oppressed for being queer, and I take great comfort in talking to my residents about their own experiences. The battles they fought, the victories in legislation that decriminalised our lives and made being open that little less scary. That fills me with pride.

But there are battles still to be won. I’m only 26, but during my education there was something called Section 28, a law that prohibited local authorities from promoting homosexuality. My teachers were not allowed to tell me that my experiences were normal and when other students bullied me for my sexuality, they were legally prohibited from telling the bully that I was normal. Even now the guidance all schools use in the Health and Sex education is from 2000, three years before Section 28 was abolished.

I will continue to dance proudly through the corridors of the sites I support. Because I feel as much pride in my sexuality as I do for the job I love. I have been grateful for the smiles I have created with my singing and dancing during lockdown. After nearly two years my residents have gotten very used to my unique ways. They are as proud of me as I am of them.