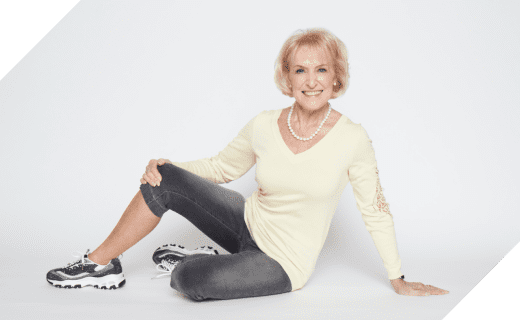 I’ve been delighted to support FirstPort’s residents with top tips on how to stay healthy and active at a time when social distancing means this is harder than ever. Through a series of fitness videos and exclusive blogs for FirstPort, I hope my advice on how simple lifestyle changes to keep fit and stay positive are helpful for you all.

As I wrote in my last two blogs, by taking some simple steps to change our everyday lifestyle – the way we eat, drink and exercise this can dramatically improve our immune systems and consequently, our chances of staying safe from the Coronavirus. To provide some further inspiration, we’ve now uploaded a third set of ‘exercise-at-home’ videos to the FirstPort website, which you can watch here.

Watching the recent commemorations and celebrations of VE Day was inspirational and emotional, and also particularly timely. It re-awoke our memories of the unbelievable hardship and the appalling suffering of those that survived and of the many who sadly lost their lives. My own father went away to war when my brother was six weeks old and he returned in time for his fifth birthday. This all happened before I was born but they must have been truly difficult and incredibly worrying times. As a nation everyone must have dug down so deeply, pulled together, supported each other, and with that positive attitude, we came through the other side – victorious.

We are now waging a war of a different kind with restrictions, challenges, frustrations and, in some cases, heartbreak, as we fight the battle presented by the Coronavirus. Today, our heroes are soldiers of a different kind – our NHS doctors, nurses and carers, among many others who help support all of us. And it was 99 year-old World War II veteran, Captain Tom Moore, who recently brought the two wars ‘together’, saluting his comrades whilst raising money for our heroes in the NHS.

Captain Tom’s goal was to walk 100 laps of his garden before his 100th birthday. Initially, he and his family thought it would be wonderful if he could raise £1,000 for the NHS in the process as they had helped him through cancer and a recent hip operation after he suffered a fall, but what started out as a great idea, turned out to be an international good-news story that touched the hearts of people across the world.

Captain Tom raised a little more than his goal of £1000. In fact, he raised a mind-blowing nearly £33 million! In these challenging times, this was truly a story that brought a smile to our faces, and maybe also a tear of gratitude to our eyes. With his unfaltering praise for the NHS workers on the front line, and appreciation for everyone who was staying at home to save lives, Captain Tom captured the hearts of us all – so much so that many of us sent him a birthday card for his 100th Birthday – in fact, over 150,000 of us! Among them, of course, was one from Her Majesty but the Queen also bestowed upon him the title of Honorary Colonel as recognition of his outstanding efforts and contribution to the NHS. And now we hear that the Prime Minister personally recommended to the Queen that Captain Tom be honoured with a Knighthood – and she agreed!

If ever there was an example of a positive attitude, Captain Sir Tom has it in bucket-loads. After his hip operation earlier this year, Captain Tom was told he needed to exercise as part of his rehabilitation and that is exactly what he did. But through his positive attitude he turned it into something much more special. Not only did he raise almost £33 million through his efforts, with Gift Aid added it totals almost £40 million for NHS charities.

I think we can all learn from Captain Sir Tom’s example and here are my five top tips to develop a positive mental attitude to help us through the current challenges:

If we develop a positive mental attitude and enjoy the things we can do – the things we can see, hear, smell, touch and taste – we will feel much happier and be happier people at the end of this very ‘different’ time of our lives. And smile!

Rosemary Conley CBE is the editor of FirstPort’s Life & Style magazine – which is circulated in print and as an online edition to over 1,000 retirement developments in the UK. She is best known for her multi-million selling diet books and fitness DVDs and as a TV health and fitness presenter, appearing for seven years on ITV’s This Morning with Richard & Judy.

Rosemary Conley was made a Deputy Lieutenant of Leicestershire in 1999 and in 2001 was the first woman to be given the Freedom of the City of Leicester. In 2004, she was awarded a CBE in the Queen’s New Year Honours for ‘services to the fitness and dieting industries’. In 2002, Rosemary appeared on This is Your Life and in 2012 on Dancing on Ice.

The views expressed in this blog reflect the author’s opinion and are not necessarily the views of the publisher. The publisher accepts no liability for any loss or damage of any kind caused by errors and is not responsible for the accuracy of claims made by the author.