Alleviating loneliness on our retirement developments

Loneliness is believed to affect nine million UK residents. While it is increasingly recognised amongst the young, it remains, as it long has been, a major issue in later life.

An estimated half of people aged 75 or over live alone. An Age UK survey found that 360,000 people aged 65 and over had not had a proper conversation with friends or family for a week, and 200,000 had gone without for a whole month.

Studies have suggested that loneliness is as bad for health as a chronic long-term condition such as diabetes or high blood pressure, and worse than smoking 15 cigarettes a day. Chronic loneliness is estimated to increase the risk of early death by 26% (Holt-Lunstad, 2015).

The independent living developments that we at FirstPort Retirement Property Services manage help extend the time that residents can enjoy a high standard of life by providing additional security, a reduced risk of falls in the home, and access to the outdoors and local amenities.

But they can also provide opportunity for social contact.

In pursuing the ethos that the properties we manage are “more than just bricks and mortar”, we encourage our development managers to facilitate community initiatives.

In the light of the current national focus on loneliness, it is worth reviewing some examples from the communities we manage to illuminate how we add value to the independent living experience.

Tiverton Court
At Tiverton Court, Hampshire, the prevalent culture was for residents to keep themselves to themselves. But Development Manager, David Lees, brought them together for weekly prime-time telly nights, coffee mornings, and for monthly fish & chip suppers.

The atmosphere changed at the development and the residents pulled together and are now planning a celebration for the royal wedding in May.

Penhaven Court
Before Christmas 2017, some residents told Development Manager, Philip Trinder, at Penhaven Court, Newquay, how they used to enjoy listening to carol singers. Philip approached the local Baptist church, whose choir put on a performance in the communal lounge.

Discussion of the success of this event showed that many residents wished they could attend church services, but were unable due to health and mobility issues. Again, the local church obliged, and the development now hosts a popular monthly service.

Alexandra Court
At Alexandra Court in Windermere the resident-maintained garden finally won Gold in the ‘Windermere in Bloom’ competition in 2017, after a series of silvers and bronzes in previous years.

Contracted gardeners do the heavy lifting – after all, the resident gardeners are all over 70, with one approaching 90! But the residents take collaborative decisions on design and planting, all funded from a communal pot, and frequently get out to prune perennials, till soil, and sow seeds together.

Through resident contributions, the committee subsidises exciting excursions for the residents, one of the favourites being to the Warner Leisure Hotel on Hayling Island, Hampshire. In December, their second visit saw residents enjoying walks and swimming, as well as a pantomime and dancing – they even invited residents of another local FirstPort retirement community, Homecorfe House.

Other social committee daytrips include Fishbourne Roman Palace in Chichester and a boat trip from Poole to Wareham.

Development Manager, Diane MacGregor, says: “I am so happy and proud with how well this project has benefitted both my residents and the children. Feedback from visits has always been positive, with people praising how the programme made them feel less lonely and excluded, and more free spirited and engaged.”

Cadogan Court
Looking to keep residents as fit and mobile as possible, Lesley Lovelock, the Development Manager at Cadogan Court, Hampshire, brought in local company Foundations Physio. The weekly exercise classes they run are tailored for the needs and abilities of participants.

Lesley says: “They really do make a huge improvement to our residents’ mobility, and to the mood. We have had a couple of participants who are reliant on walkers, but all have seen some improvement.

“After three-quarters of an hour of exercise, people also see the benefit in their mental wellbeing, there’s a definite feel-good factor. They come out and there’s giggling and laughing – it’s as much social interaction as exercise.”

Digital Eagles
In 2016 we established our Digital Eagles initiative to help colleagues and customers to make the most of digital connectivity. This team is drawn from FirstPort colleagues seconded from their day jobs to share their expertise.

Since their inception, they have visited more than 700 FirstPort developments, including many retirement communities across the UK, and helped more than 2,000 customers at ‘Tea & Teach’ sessions to learn basic and advanced operation of computers, tablets and smartphones, to complete administrative tasks, shopping or selling goods online, to share photos and video with far-flung friends and family.

Homeoaks House and Homedale House
Back on our developments in Dorset, residents are doing it for themselves, with two tech-savvy residents sharing their expertise with neighbours in monthly IT sessions.

On the last Wednesday of each month, residents meet up in the morning with their laptops and tablet devices in the communal lounge. Some have just been looking to save on stamps by using email and social media instead, some have opened accounts to do shopping online, and one resident in her 80’s has been shown how to Skype her family in Australia. 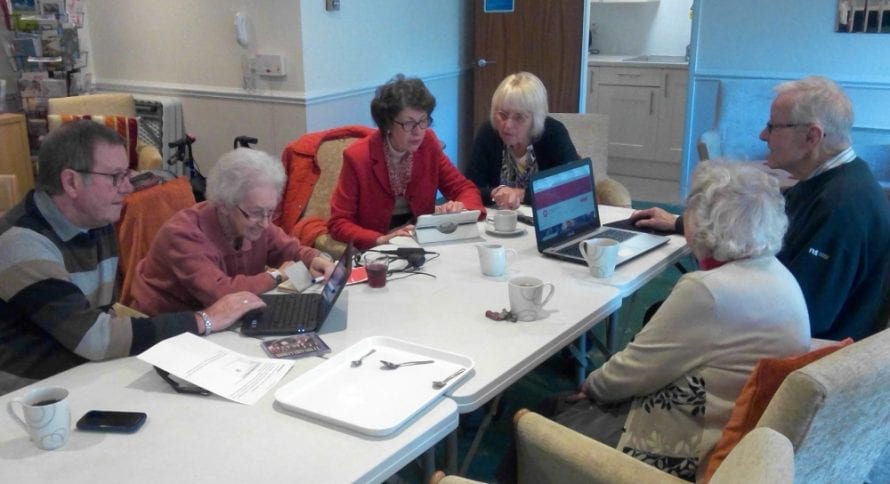