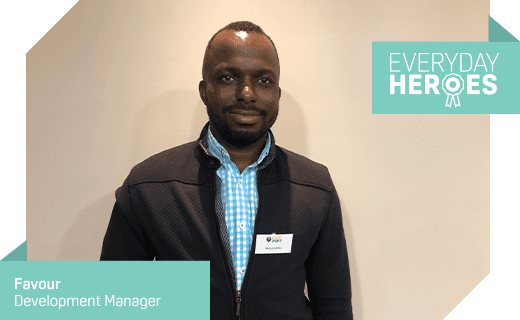 Our Property and Development Managers are Everyday Heroes because, they always go the extra mile for our residents. Making sure that they are comfortable and taken care of at all times, and in every situation.

Development Manager, Favour, started his career with FirstPort 12 years ago as a Concierge. His dedication and commitment to his residents helped him achieve a promotion to Development Manager, and these are traits he showcased recently when a Sunday shift took an unexpected twist.

An unexpected twist on a Sunday

On a stormy Sunday, Favour was preparing to leave for home following a long day at work. Everything seemed fine as he completed his final checks, until one of his residents called to say that there was a small leak of water coming into his property.

As an experienced buildings manager, Favour knew that a small leak could turn into a big issue quickly and he went to investigate straight away.

Almost certainly due to Favour knowing his development so well, he was quickly able to find the source of the leak and stop it. Instead of going off to enjoy the rest of his Sunday, Favour decided to stay a little longer – just to make sure everything was okay.

“Something just didn’t seem right,” Favour says. “I just had an inkling that there might be more to the leak than meets the eye. I know that water leaks can end up causing much bigger problems, so I decided to stay and make sure my residents were okay,” says Favour.

Favour was right to be cautious. Very soon, the resident called again to say, unfortunately the leak had returned.

Favour immediately called in the assistance of a contractor, however, it being a Sunday night, he was told to expect about an hour’s wait. Whilst waiting, Favour continued to investigate the problem and discovered the source of the leak was coming from a burst water pipe from the flat next door, where the residents were on holiday, meaning there was no access to the flat.

From bad to worse

With no access to the flat and the contractor still far away, the situation was quickly becoming more serious, and Favour knew he had to act quickly to prevent long-term damage or possible injuries.

“The water was now coming quickly from one of the top floors; it could have easily damaged the ceiling and flooring, and could have made its way to the electric mains. My priority was keeping my residents safe, so I decided to make the difficult decision to stop the water from the mains supply to stop the flooding,” says Favour. “I knew the decision wouldn’t be a popular one with residents due to the practicalities of having no water, but I also knew the short-term inconvenience far outweighed the long-term damage that could have been caused.”

Favour was right, when residents found out about the water being turned off, they began to worry about how they would get ready for work the next morning.

Favour’s calming and authoritative presence soon allayed any worries. “I reassured them the situation wasn’t permanent and explained what we were doing and why. I also made sure that the practical things were taken care of, like making sure there was enough drinking water available.” Favour says.

It was a good job Favour stayed late on that Sunday, long after the end of his working day. On investigation by the contractor, he discovered that the leak from the burst water pipe affected 40 flats in total. Favour’s expert knowledge of the building and his great relationship with his residents, allowed the work required by the contractor to be done quickly and efficiently.

One resident, who has recently had a baby, summed it up: “If Favour is around I know everything will be okay, whatever the situation, Favour always has it under control.”

Within 48 hours, Favour managed to get his Development back to normal, whilst making sure his residents daily lives remained as undisrupted as possible. Favour continues to take great care of his Development and his residents, putting them at ease whenever he is around.