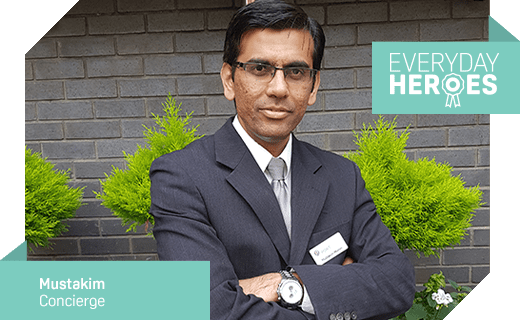 It’s not just our Property and Development Managers, but our Concierges are FirstPort Everyday Heroes too. Doing everything they can to make sure our residents feel safe and secure in their homes, whilst showing great kindness and care for them too.

Our Concierge, Mustakim, is committed to making his residents happy and is known for his respect, politeness and friendliness. He knows all 300 of his residents’ names and will always give them a warm greeting that brightens up their day.

Mustakim carries out the day-to-day Concierge tasks with flair – when Mustakim sees a resident approaching on the CCTV camera, he has checked for deliveries, retrieved their parcel, and has it waiting for them, all before they reach the Concierge desk. When it comes to his residents’ guests, he quickly recalls the flat number of the resident they are visiting and directs them without any prompting.

It’s not just the little things that count with Mustakim, his vigilance when it comes to security is something that he is constantly praised for and makes residents feel safe in their homes.

One day, Mustakim noticed a car hanging around the development that he didn’t recognise. His attention to detail was key here. “The car struck me as unusual as I’d never seen it before,” he says. “It was suspicious as it didn’t seem to have a purpose. I just knew something didn’t feel right, so I kept my eyes out for it returning”.

A couple of nights later, the same car unexpectedly rammed into the development’s car park gate. Mustakim immediately ran out to approach the people in the car, which spooked them and made them leave in a hurry. Thankfully, they were unable to break the gate this time, but this put Mustakim on high alert.

He suspected they would return and try to steal the motorbikes that were parked in the development car park. Mustakim advised his residents to stay alert, and reassured them that he would do everything he can to keep them safe.

Acting quickly to protect his residents

A few days later, the same group of people in the same car came back and rammed the gate again. This time they were successful in breaking it down and Mustakim’s suspicions were confirmed – they were heading for the motorbikes in the car park.

Mustakim reacted quickly as soon as he recognised the car on the CCTV camera when it approached the gates and he immediately called the police. He then ran outside and chased the thieves away before they had the opportunity to take off with the motorbikes.

“In that moment, I didn’t think about anything other than protecting my residents and their belongings,” Mustakim says. “I had been on high alert since my suspicions over the car and as soon as I saw it on CCTV, I knew I had to act.”

As Mustakim chased the thieves away, the CCTV managed to capture a clear photo of their faces, which was provided to the police and helped them to identify them. Mustakim even went to court to testify as a witness, resulting in guilty charges and a prison sentence.

One resident said, “It’s difficult to express in words just how amazing Mustakim is and how indispensable he is to our Development”

Thanks to Mustakim’s quick thinking actions and security conscious approach, residents feel safe and looked after in their homes. Well done, Mustakim.