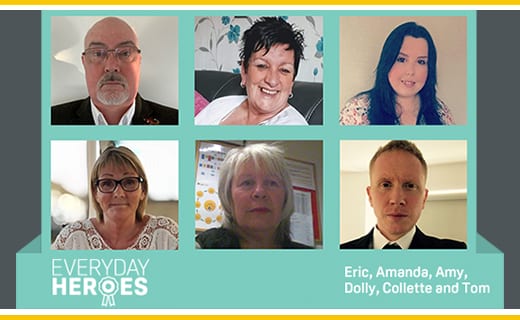 Our on-site teams really do deserve their FirstPort Everyday Hero status because, more often than not, it’s their quick-thinking, composure and organisation that makes sure issues – big or small – are swiftly taken care of so our residents can feel safe and happy in their homes. This time, our Everyday Heroes story recognises an ‘A’ team response involving six committed colleagues.

A storm is brewing

In January 2021, floods caused by Storm Christopher devastated homes and business in the north-west of England, including one of our retirement developments. With residents’ safety at risk and their properties in jeopardy, Development Managers, Collette, Dolly and Amanda, alongside Area Managers, Eric and Tom, and Regional Manager, Amy worked tirelessly together to ensure that everyone was cared for while their homes were made safe.

“The area is prone to flooding, and this building was flooded in 2019, so there was 15 months between the two,” explains Collette, whose own car was written off due to water damage from the flood.

“The building was an island, we were surrounded by water,” said Collette. “It even started coming up through the floor in the lounge.”

As water levels rose significantly, many in the area began to evacuate their homes. For Collette and her residents this presented its own challenges and required all hands on deck, with Area and Regional Managers Eric and Amy dropping everything to support.

Keep calm and carry on

“We had no electricity, but by the time they could have evacuated us, it would have been dark,” said Collette, who was mindful of residents with mobility problems. With limited options until the morning, Collette took it upon herself to ensure residents were safe throughout the night and prepared for evacuation the following day.

“All I could do all night was walk the floors. The emergency power stopped, because the batteries only last for so long, so I just had the torch on my phone. “

“That morning, I made sure they’d all had something to eat and were packing bags, because I knew they would be taking us out and we wouldn’t be back the same day.”

Whilst Collette was on the front line behind the scenes, Eric and Amy were making sure things ran as smoothly as possible, liaising with the vast number of stakeholders involved in the operation and leaving Collette more time to focus on her residents.

Emergency services and local volunteers attended and safely removed all of the occupants from the building, moving them to a nearby hotel. However, for the FirstPort team, their duties continued throughout the days and weeks ahead.

“I had about four and a half hours sleep in three days,” said Collette. “I couldn’t leave my residents in a strange environment, and because of COVID-19, relatives couldn’t come, but the residents were brilliant, I was so proud of how they dealt with it.”

During the evacuation, neighboring Development Managers, Dolly and Amanda, made themselves available and were an exceptional support. Dolly, a familiar face to many of the residents, made sure they were happy and comfortable and provided that extra little bit of reassurance that everything was going to be okay. She was also on-hand to support the contractors who needed immediate access to Weaver Court after the flood to make the development safe. Amanda also gave up her own time to support, delivering toiletries and other essential items to the residents whilst they were away from home.

Although long-term remedial works would be required at the building, residents were cleared to return to their homes after four days in the hotel. The team were on-hand once again to help welcome residents back to the building and provide extra assistance to those that needed it. This included Area Manager, Tom, who drove over from Leeds to provide extra support to residents, some of whom had mobility issues and needed extra assistance as the lift was out of action.

Reflecting on the experience and the deserved praise the team received from the fire service, Collette insists their duty to residents was the only motivation.

“They’re our residents,” commented Collette. “I know I speak for the whole team when I say that we felt responsible for them, even though they weren’t in the building.”

“Personally, even when we went to the hotel, I thought ‘I can’t leave them, I can’t pack them onto buses and say ‘see you later!’”

While remedial works at the development are ongoing, the whole team, are delighted the residents are back where they belong!