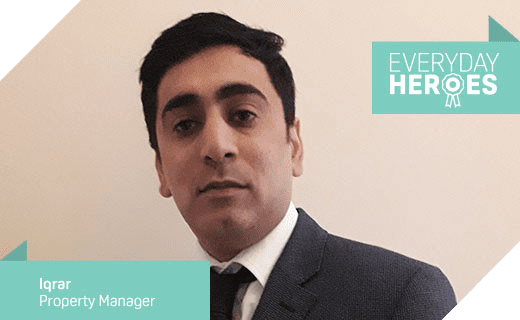 Our Property and Development Managers are Everyday Heroes because they always go the extra mile for our residents. Making sure that they are comfortable and taken care of at all times, and in every situation.

This month’s Everyday Hero is Iqrar, who, since joining his development early last year, has been praised by both residents and colleagues alike for his friendly, ‘no problem is too big’ approach to his role.

Whether a resident has a complex property question or there’s a glitch on site, his empathetic, community-spirited manner has brought about positive and swift resolutions – especially when 32 lifts across his development were earmarked for refurbishment.

The lift refurbishment project meant that 32 lifts servicing 724 apartments would be out of action for five weeks. Iqrar took charge and planned ahead to make sure his development run as smoothly as possible while the work was taking place.

“The disruption caused by building work can have an impact on residents’ lives,” says Iqrar. “Many of them lead busy lives, the last thing they need is additional stress or disruption”.

“Well in advance, I emailed every resident about the refurbishment, delivered a letter to each apartment and posted announcements around the development.”
Unsurprisingly, many residents were concerned about the potential impact this would have on their day-to-day lives, especially those most likely to be affected, such as the elderly and less mobile. That’s when Iqrar’s people-focussed qualities kicked in…

Iqrar immediately made himself the first point of contact for residents, both before and during the refurbishment. He also put a series of plans into action, each designed to reduce the amount of disruption to everyday life.

“I hired porters to assist residents in carrying bags and parcels up and down the stairs,” he says. “I also had chairs installed on every floor landing, so residents could take a rest between floors if necessary. We installed a safe, so people could store their valuables, and created storage areas in the basement for them to keep heavy items.”

Iqrar was particularly concerned about the impact of the lift work on one of his most vulnerable residents.

“I gave the lady my mobile number and told her to call me for assistance at any time, even out of hours, should she have any difficulties. I also arranged for her to be given a parking space immediately outside her block.”

A big THANK YOU from residents

Thanks to Iqrar, what could have been a difficult period was made easier and residents, recognising his commitment, were incredibly grateful.

“When the project was complete, I received so many thank-you emails and lots of people stopped me to say how grateful they were to me and my team for keeping them informed and making it as stress-free as possible,” says Iqrar.

Creating a lasting sense of community

“Because of the refurbishment, I really got to know people quite quickly and now many of them stop for a chat whenever they see me.”

Iqrar credits his family, and in particular his grandfather and growing up in a close-knit community, for his passion for helping others and says that making every customer happy is his priority.

“I’ve always wanted to help people. If I see an opportunity to make someone’s life a little bit better, I’ll take it.