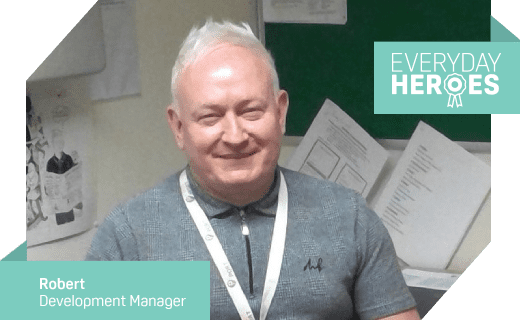 Our Property and Development Managers are Everyday Heroes because they always go the extra mile for our residents. Their work is wide and varied, with the consistent aim of keeping residents happy in their homes.

For Robert, our Development Manager, this recently involved going above and beyond, leaving one resident grinning like a Cheshire cat.

“I take pride in my work to ensure the development is always presentable and warming to residents, their families and visitors. I have done this job for over 30 years and I get great satisfaction from delivering a high quality, professional service.” Said Robert.

This particular story demonstrates Robert’s dedication to his residents. The tail begins on a cold April morning, where Robert discovered a stray cat.

“I found a kitten on the communal lawn, it was a cold morning and she came running up to me constantly meowing, she pulled on my heart strings as a cat lover.” Robert explains.

“The next morning, she was there again she had come from underneath the large bushes. She was so thin and little, I got some cat food and some water for her from my apartment – my gosh, she was hungry!”

The caring actions of cat-loving Robert caught the eye of the daughter of a resident, also concerned for the welfare of the little visitor. As the pair discussed how best to care for the cat, one idea gave them both paws for thought.

Robert explained: “I just said to her ‘Your mum doesn’t want a cat does she? It seems she’s been abandoned.’ She said yes straight away.”

The development’s newest resident, now named ‘Missy’, proved to be great company for her new owner, who had struggled to adapt to living alone, after her husband had been admitted into a care home.

“Mrs Honnor took the cat in and kept her indoors for a while. She found great comfort from her.” Said Robert.

“She was so lonely and feeling depressed and the cat just changed her lifestyle and bought her so much joy and companionship.”

Missy puts the cat among the pigeons

Seven months on, Robert arrived for work, to hear that Missy had not been seen for two days, leaving her owner distraught.

Robert led the search party, searching surrounding streets, armed with a bag of treats, calling out for Missy, but to no avail. After another unsuccessful search later in the day, Robert headed home, still preoccupied by his concern for the missing pet.

“Missy was on my mind most of that night.“ Said Robert. “Being a cat lover, I felt the resident’s worry as if she was my own.”

“At 9pm I could not rest thinking something bad may have happened to her, I decided to just go out and try one more time so I popped out into the communal gardens going around calling ‘Missy! Missy!’ and she appeared from hedge of laurel bushes in a secluded corner of the garden!

“Mrs Honnor became so emotional and thanked me for finding her and bringing her back home.”

After her little adventure nearly gave her owner kittens, Missy continues to enjoy her new life, whilst remaining far closer to home, where she is being spoilt with lots of toys and treats.