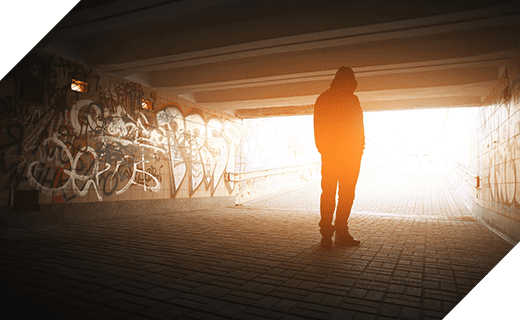 The video is intended to demonstrate the prejudice and misunderstanding homeless young people face from the public day to day.

Some of the comments include; ‘Homeless people are nothing,’ ‘A lot of these so-called homeless are of their own making,’ and ‘Why don’t you just go home?’

In reality over half (55 per cent) of the young people that Centrepoint supported in 2018 told the charity that they left home due to a family relationship breakdown, one in ten (12 per cent) left home because they were experiencing physical and violent abuse, 36 per cent were care leavers and 29 per cent had been sleeping rough .

Centrepoint’s Youth Homelessness Databank, which revealed that 103,000 young people were homeless, or at risk of homelessness, in 2017/18, also found that across England a young person’s family refusing to accommodate them was the biggest reason for homelessness among 16 to 24-year-olds, accounting for over a third (37 per cent) of cases.

Furthermore over half (53 per cent) of the young people who were supported by Centrepoint in 2018 initially needed mental health support.

Aidan, who left home when he was 20 due to a family relationship breakdown, said: “One of the comments in the video was someone telling us to go home but most young people don’t have that choice to go back home, they left for a reason.

“That shouldn’t get in the way of other people’s thinking because, if they had the same choice to make, they’d leave home as well.

“If I was to go home my dad was going to force me to marry someone that I didn’t want to marry. So that’s why I left. If I did go back he would have made me marry the guy but, because I’m a female to male transgender, it doesn’t help my situation.

“I have had people ask me ‘why don’t you just go back home?’ and because I don’t speak to my father anymore they also tell me to speak to him but they don’t know my situation, so shouldn’t tell me what I should do.

“If they were in our shoes they would do the exact same and they’d feel exactly the same as we do now reading their comments.

“Homeless young people aren’t nothing, we have emotions and feelings too. Nobody would like being called ‘worthless’ or ‘nothing,’ so why do it to others?”

Paul Noblet, Head of Public Affairs at Centrepoint, said: “Despite what the comments highlighted in our video say, going home simply isn’t an option for the young people who Centrepoint supports.

“As anyone can imagine becoming homeless has a detrimental effect on a person’s confidence and self-worth and the stigma that we see on our social media channels, which many homeless young people have to face in their everyday lives, can leave them feeling even less confident and even more disengaged.

“Thankfully these attitudes represent a minority of the public, and we’re extremely grateful that a majority of the comments we receive are positive. At Centrepoint we will continue to tackle the stigma around youth homelessness by not only rebuilding young people’s confidence through mental health support, education, training and sports programmes, but also through continuing to challenge both Government policy and public understanding on the issue.”

We’d also like to invite you to help us fundraise, or make a donation, however small to our justgiving page.